Adam Benford pursued a decorated career in the military, enlisting at a young age where he learnt some harsh lessons about life, especially in the business of keeping and revealing secrets. Prior to this he studied and graduated from Ivy University in Tall Oaks, thus beginning a lifelong association with the campus. In the early 1980s he met Derek Simmons and they went on to become firm friends. Following the conclusion of his military career, Benford moved into politics, an avenue Simmons also pursued. This career switch came naturally to Benford who gained a positive reputation in political circles for being an honourable man of his word and with integrity. He was also necessarily outspoken in his behaviour and was full of self-righteousness. 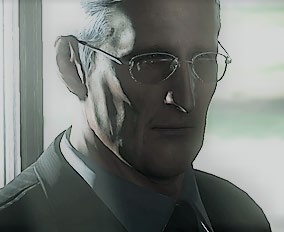 By the time of the 1998 Raccoon City incident, Benford was a high-ranking government official. After evaluating Leon S. Kennedy, one of the survivors of the incident, Benford hand-picked him for a role in the U.S. Government as an agent in training for a new Secret Military Agency. This group was Benford’s brainchild dedicated to dealing with illegal bio-organic weapons and would later be formally named as the Anti-Umbrella Pursuit and Investigation Team (A.U.P.I.T.). Benford believed Leon had the skills and intelligence to become a top asset for the government against foreign and domestic threats, something which would almost certainly involve bioterrorism.

Benford guided Leon’s progress and helped nurture and elevate his position through the ranks until he was awarded the prestigious position of protecting the new president’s daughter in 2004. Although their personalities were opposite with Benford an outspoken bureaucrat and Leon a calm and controlled field agent, they complimented each other perfectly and became a strong team.

Trust was important to Leon and Benford had earned that trust with Leon finding himself able to rely on a man who had never directly faced the evils of bioterrorism. With mutual goals and a mutual respect, they grew close in over ten years of fighting bioterrorism together. Various government agents had often tried to get Leon to open up about what he experienced in Raccoon City, but he would always avoid them. He would only talk about his demons with Adam, and he confessed to him in confidence that he contemplated committing suicide during the incident, and had it not been for Sherry Birkin and Claire Redfield, he likely would have succeeded.

In 2005 Benford recruited Tyler Howard for the Secret Military Agency following a t-Virus outbreak at St. Cloud in Minnesota. At the time, Howard was a police officer with the Rochester City Police Department and he worked with B.S.A.A. agents on the ground to co-ordinate rescue efforts, including former S.T.A.R.S. member Rebecca Chambers. During the incident Howard recovered a data pad containing proof of illegal human experimentation and evidence that the incident may have been caused by a group of former Umbrella Corporation employees. Like Leon before him, Benford saw a potential in Tyler and persuaded him to join the team, likely promising to help him track down his missing father, Ryan Howard. To cover up his tracks, Benford arranged to have Tyler’s death faked to ensure no loose ends were left behind.

Benford continued to rise up the political ranks before eventually running for the Oval Office to succeed President Graham. His election campaign had a strong focus on the youth of America and he was successful, becoming inaugurated as President in early 2011. Benford quickly became a popular leader with the American people. He identified B.O.W.s as a ‘global threat’ and was determined to stamp out bio-terrorism. He made Derek Simmons his National Security Advisor and wanted to form a domestic anti-bioterrorism unit made up of elite government agents to send a message to any bioterrorists ready to threaten the United States. Although the B.S.A.A. was already well-established, Benford wanted a unit made up of his own people but was determined to avoid the mistakes made by Morgan Lansdale and the F.B.C. in years gone by.

With Leon’s help, Benford founded the Division of Security Operations (D.S.O.). The idea was to select the best agents from various government branches stationed around the world and bring them together as a unit that would answer directly to Benford’s orders to engage any bioterrorist threat to the United States. Leon became a founding member and the D.S.O. was officially established in February 2011. Many of the new field agents were transferred over from the Secret Service and had top level clearance to sensitive materials and were authorised to use lethal force. To aid this group, Benford also created the Field Operations Support (F.O.S.), a support group tasked to provide intelligence and strategy for agents from multiple U.S. intelligence agencies discharging their duties around the world. As the dangers posed by bioterrorism came to take priority for U.S. security, the F.O.S. quickly evolved to oversee all operations that dealt with response to and prevention of bioterrorism. Benford installed Leon’s associate Ingrid Hunnigan as Operations Co-ordinator.

Under Benford’s leadership, these two combined organisations led an aggressive war on all enemies and within two years of their formation, had all but eliminated any threat to the United States. This swift action led to the D.S.O. becoming known as the Sword of the President and Benford’s popularity with the American public soared. Early in his presidency, he also returned to Ivy University to give a speech on the Youth of America.

In 2013, Benford assessed the threat levels of bioterrorism and concluded it was still as high as ever, despite there being no major incidents for over two years. He was also acutely aware that in certain pockets the American citizens were still deeply distrustful of the U.S. Government amidst rumours they had been in collusion with Umbrella all alongin the years leading up to the 1998 Raccoon City incident. He eventually decided to make a public speech and reveal to the world the full truth of the Raccoon City incident. His hope was that this show of honesty, acceptance of responsibility,and the resulting lessons learned would make other guilty parties come forward and unite the world in the fight against bio-organic-weapons. However, he knew this was a big risk and his close associates were deeply opposed to the idea, believing it to be political suicide.

National Security Advisor and close friend Derek Simmons was the most vocal, believing that if the truth was revealed the U.S. would lose all of its authority and standing as a superpower,and that the global political order would collapseas a result. Leon was also apprehensive, but agreed to stand behind his friend. Benford knew he was risking everything and that such an important disclosure would likely create more problems than it would solve, but he saw no alternative if they were truly to have a chance at eradicating bioterrorism for good.

To his credit, Benford was brave to put his entire career and reputation on the line, and even saw off intimidating threats from the mysterious group known as The Familyin order to get the truth out to the public. At the end of June he was due to visit his former stomping ground at Ivy University in Tall Oaks and decided to choose that moment to give his speech to the world. The date was set for June 29th and he would have Leon Kennedy there with him for this unprecedented moment. However, what Benford was unaware of was that his friend Simmons was the leader of The Familyand they decided to stage a bio-terror attack in Tall Oaks using the C-Virus just as Benford was due to give his speech. The attack was successful and Benford was infected before he could reveal the truth, becoming a mindless zombie.

In the end President Benford was shot in the head by none other than his close friend Leon. As a result, the truth about the government’s involvement in Raccoon City was never revealed.