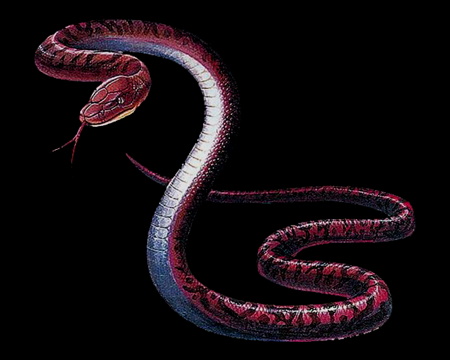 These adders inhabited Raccoon Forest and became secondarily infected after feeding on creatures and corpses that had already been exposed to the t-Virus. Although no major changes in appearance was observed, the virus caused them to multiply in large numbers and their natural haemorrhagic venom became even stronger. They detected their prey by sensing body heat, preferring to lie in wait in tree tops and then drop down on top of them.

Adders thrived in damp and dark places such as the underground mining tunnels and could almost always be found close to a water source. They possessed faster reflexes than a typical snake and would jump to bite their prey on sight. This bite would secrete the enhanced venom and carry the risk of transferring the t-Virus. Adders liked to attack in groups though the natural green-skinned adder would only cause flesh wounds.

But due to the unnatural breeding rate, a red-skinned variant began to appear with even more potent toxicity in its venom