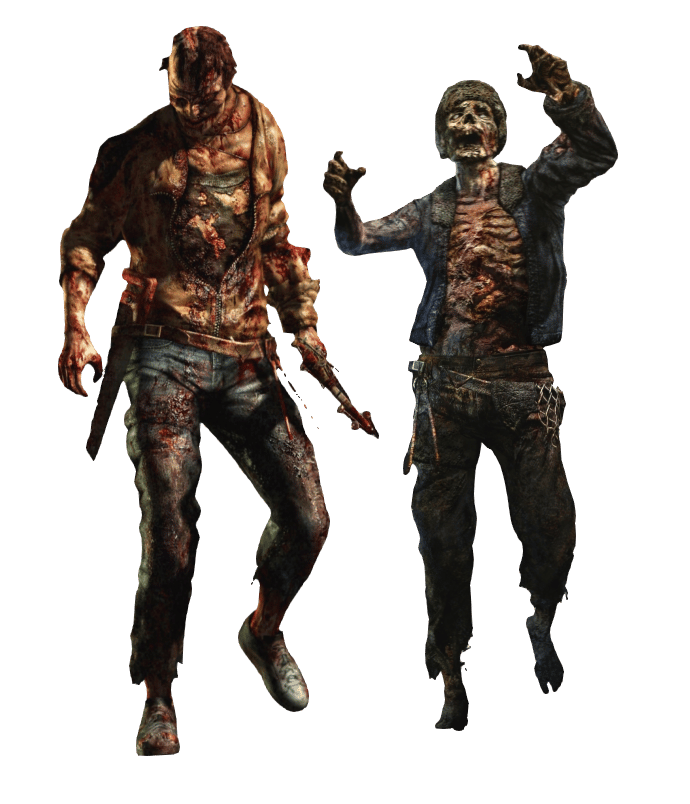 Afflicted is the term used for human beings exposed to the t-Phobos virus during trials to test out the virus’s delivery system of flushing the internal circulatory system with adrenaline and noradrenaline. Once infected, each subject was subjected to torture and abuse to trigger fear response levels and activate the virus. The severity of the fear levels resulted in drastically different mutations. Typically the ‘Afflicted’ remained largely human but their brains slowly degenerated and they acted increasingly aggressive and hostile whilst also losing nerve sensitivity and natural pain receptors.

In the early days of the virus’ development, researchers developed a sensor bracelet for the test subjects to wear to accurately record their fear levels. To test each individual’s unique responses and resistance, all had been subjected to torture on the island’s prison facility, resulting in amputated limbs and metallic implants. In many subjects barbed wire had been wrapped tightly around the flesh, and others had metal rods or sharpened implements hammered into them. This combination eventually drove the subjects to become delirious and mad with fear and pain, leaving behind nothing but an almost animalistic instinct to self-preserve, meaning they would attack anything on sight. They defended themselves by biting or grabbing and they were capable of utilising everyday objects as primitive weaponry.

Because of the unique delivery system of the t-Phobos virus, the infection process was slowed in most cases, meaning that unlike the zombies created by the t-Virus, the Afflicted remained human for longer and their bodies and brains did not degenerate as fast. This resulted in intelligence levels being preserved for longer, ensuring they retained memory reflexes to remembered basic functions such as climbing ladders, opening doors and carrying everyday objects. Likewise whilst their skin still showed signs of necrosis, the rate of decay was slowed down significantly compared to a regular t-Virus infectant, meaning muscle retention and organ viability were extended enough to allow the Afflicted to run for short bursts and display impressive jumping ability. An unnerving symptom with Afflicted subjects is feelings of euphoria, like an excessive high brought on by a recreational drug. This symptom manifests in random fits of laughter and joyous screaming by those infected.

Afflicted had a weakness to sunlight and bright illumination, through this was thought to be down to the environment in which they were subjected to torture and abuse. The Penal Colony on Sushestvovanie Island had all its windows blacked-out and the subjects were never exposed to daylight, meaning their ocular perceptions were accustomed to permanent darkness. A side effect of the virus often resulted in large tumours growing in and around the subject’s head. Damaging these tumours could generate two special variants of an Afflicted. The first was an entirely independent organism known as a ‘Cyst.’ These were small congealed lumps of tissue infected with the virus. They would lie dormant on the floor and react to nearby movement. Once a target wanders too close they would immediately swell up and burst, spreading out a wave of acidic bile that could seriously burn anyone caught in the blast. Alternatively, causing significant damage to the tumours caused the virus to rapidly mutate the host body, swelling it to obese proportions as more tumours covered the outer flesh and the stomach filled with corrosive acid. These were known as ‘Sploders and once the creature detected a proximity alert, it would self-terminate and burst completely, spraying bile in all directions across a wide radius. This mutation is strangely similar to the ‘Ooze Chunk’ subjects infected with the t-Abyss Virus.

Strangely, researchers noted that although female subjects could suffer extreme mutations when exposed to the t-Phobos Virus, there were no documented female Afflicted subjects. When the virus broke containment measures and spread across the island in early 2011, any males secondarily infected soon regressed into Afflicted subjects, but all the women died horrible, painful deaths. The cause of this has yet to be fully determined.

‘Rotten’ was the term used for when Afflicted subjects degenerated so badly after a sustained passage of time that they actually died, and their decomposed and skeletal remains were reanimated by the t-Phobos Virus after every cell in the body became infected. In this state their skeleton was exposed in several places across the body following prolonged periods of necrosis and rigor mortis. Due to increased muscular decay they were not as fast and agile as their previous Afflicted state and were also inherently weaker as a result.

Their behaviour in this guise was therefore not unsurprisingly similar to a standard t-Virus infected Zombie and its intelligence levels were low. Whereas an Afflicted would attack anything on sight due to madness and a desire for self-preservation, the Rotten would attack its prey for sustenance. Intelligence levels were non-existent and their existence relied only on the need to feed. Because the t-Phobos Virus was manipulated to weaken the lethality of the t-Virus, the infection period lasted a whole lot longer meaning it could take as long as six months for an Afflicted subject to be killed and reanimated into a Rotten.

Like a regular zombie they would sometimes lie dormant on the floor to conserve energy. They could still move quickly for short bursts but could be defeated extremely easily due to their weakened state. As individual subjects they posed little threat but were dangerous when attacking in groups. Because the subjects were now clinically dead, they suffered no adverse reaction to sunlight unlike their original Afflicted counterparts. The primary difference between an Afflicted and a Rotten is that the Afflicted were technically still alive.