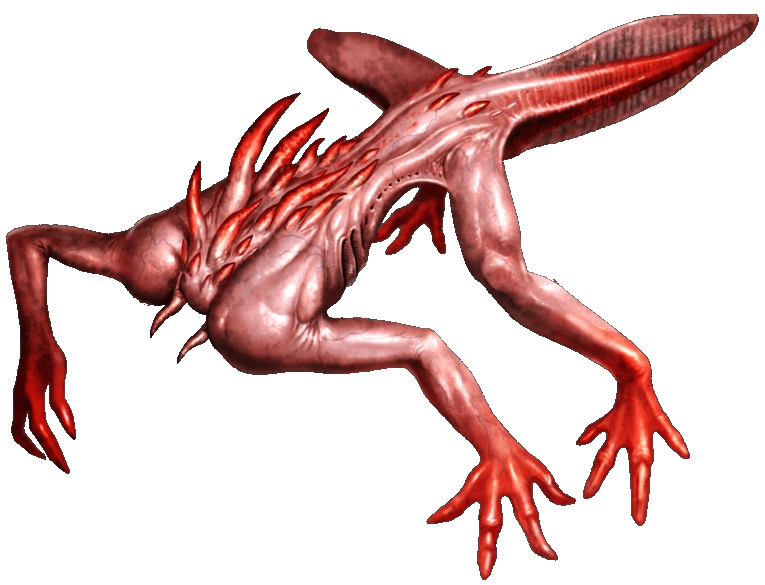 The Albinoid is the result of injecting the t-Virus into the genes of a local Salamander native to Rockfort Island. Like a normal amphibian, the resulting organism changes as it grew with age. In infancy, the organism possessed two legs and a ‘tail’ it used to propel itself forward. It had a mouth on the underside of its body and was salmon-pink in colour. It was also capable of discharging moderate amounts of electricity to stun any nearby prey.

What was most impressive to researchers was its rapid growth cycle which was approximately 10 hours from birth to adult form. Its length exceeded 2 metres during the transformation process and in its final adult stage the creature possessed four legs resembling human arms. It had a bizarre appearance due to the obvious lack of a head and also developed spikes on the top of its body as an added defence mechanism. The adult creature was highly adept at mobility and was able to discharge large amounts of electricity far greater than the infant species.

The Albinoid was a natural swimmer and was most effective as a weapon when in an aquatic environment. Although weaker on land, the Albinoid retains a
remarkable ability to crawl and slide across the floor, walls and ceilings. The prototype specimens were developed in the laboratory based at the Military Training Centre and Umbrella’s planned strategy was to allow them to infiltrate enemy territory undetected whilst still in juvenile form. Then as they developed into adults they could wreak havoc by contaminating the water supply and discharging lethal amounts of current. The potential for the Albinoid as a weapon was high but research was shelved after all the specimens were destroyed during the 1998 biohazard attack launched by the rival company.

The juvenile version of the Albinoid presented as potentially formidable weapons in their own right. Being much smaller, they were able to infiltrate enemy terroitory making use of their powerful tail and webbed claws for swift transit.

Like their adult counterpart they retained their electrical properties making them extremely dangerous B.O.Ws. A small group of Albino’s infiltrated the Military Training Facility during the t-Virus outbreak on Rockfort Island.