Alexia Ashford was a product of the Code: Veronica experiment; an artificially created twin born using genetic material taken from the preserved corpse of her great ancestor, Veronica, combined with an artificially strengthened, isolated gene that regulated intelligence. She was born as one of two twins in 1971 and even as an infant she demonstrated remarkable forward-thinking abilities and matured behaviour and mannerisms. The mastermind of Code: Veronica was her father, Alexander Ashford, although not biologically so as his own sperm was never introduced during the fertilisation process. His artificial tinkering of the intelligence gene had seemingly worked and from an early age multiple aptitude tests proved Alexia had rapid intelligence levels that classified her as an uber-genius. 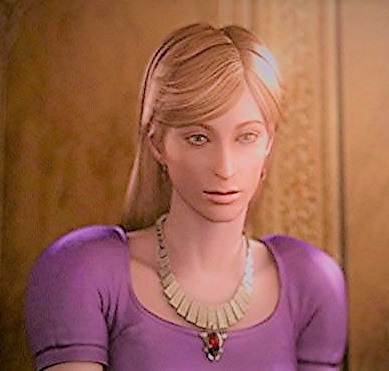 But this manipulation of her genetics had robbed Alexia of all humanity and compassion, instilling within her an all-consuming superiority complex. She was unusually cold and haunting, born with a heart of evil. She had a twin brother named Alfred who suffered the same problems, but because he was an unexpected by-product of the experiment, his levels of psychotic tendencies were not quite as elevated.

Whilst Alfred could be classed as insane, Alexia was a full-on sociopath. Their relationship was also very unequal. He treated her with the utmost love and devotion but she lorded over him like a master might a slave. Alexia was educated privately and spent most of her early years confined to the South Pole base.
She attended university at a phenomenally young age and took charge of Umbrella’s German laboratory at the age of just 9. A year later she graduated from a world-famous university at 10 which made newspaper headlines across the world. Careful to nurture such a talent, Umbrella Corporation offered her the position of Chief Researcher at the South Pole base and she accepted that post, taking over the director’s role from her father.

Alexia became the talk of the whole company and soon struck up a fierce rivalry with William Birkin who became obsessively jealous of her achievements and the fact she was younger than him. Whilst her presence and reputation began to make Birkin’s work suffer at Arklay Labs, Alexia’s genius ensured the Ashford’s t-Virus research was soon back on track and ready to elevate above other senior research teams working on the project. Alexander was immensely proud of his daughter and relieved that her intellect was rapidly making up for his own shortcomings. His hope was that Alexia’s work would emulate and surpass even his own father; the great Edward Ashford.

He gave Alexia a necklace with a red jewel and the jewel could be removed and yielded as proof of Ashford family lineage. He also presented her with an antique music box as a gift. The berceuse melody played by the music box became an obsession for her and she made up her own lyrics depicting a friendly king married to a very nasty queen and the king’s heart was eventually pierced by an arrow. This lyrics would chillingly have significant meaning in later years.

For her t-Virus work, Alexia focused on the study of ants and their collective social structure and hive-mind mentalities. Whilst examining a queen ant she discovered traces of an ancient virus. She combined this with the Progenitor Virus and infused DNA taken from plants to fill the gene sequence gaps. This created a new t-Virus strain Alexia referred to as t-Veronica. The new virus quickly became the talk of the lab and soon hearsay about Veronica’s potential had spread to other Umbrella branches. But internally, Alexia’s thirst for dominance had clouded her mind and she had no intention of restoring the Ashford family’s former glories. Instead she had from the outset planned to use t-Veronica to shape the world into a giant hypothetical ant colony, installing herself as Queen with control over all the drones working beneath her. This vision was because of her isolation at being so intelligent and ultimately judging every other living organism to be beneath her. She had always been socially isolated, with no friends and an alienation from her co-workers. She referred to the rest of humanity as the ‘ignorant masses’ and even saw her own brother as nothing more than a ‘loyal soldier ant.’

An early experiment to demonstrate the ideal workings of the harmonious eco-system was the creation of the Alexia-Pod; a giant plant with sentient intelligence. When the t-Veronica virus was perfected, Alexia planned to inject herself which would give her a symbiotic relationship with the plant and
control over its many far-reaching tentacles.

By now, Alexander began to see the dangers of his daughter’s obsession with the Veronica virus after discovering evidence in her laboratories that she had been performing minor experiments on her own body. He had long harboured suspicions about Alexia’s sanity and the burdens of her extraordinary intellect, and his fears were realised when he discovered her desire to unleash t-Veronica across the world. He worked with Umbrella Industries to secretly create the Linear Launcher; a weapon capable of firing charged energy particles designed to attack organisms infected with t-Veronica. He hid the weapon away and pre-recorded a message explaining it should be used if Code: Veronica ever reached a critical stage and his daughter’s machinations began to bear fruit.

In 1983, Alexia and Alfred discovered the terrible secret about their origins when they broke into the lab containing all the Code: Veronica research archives. In revenge, they captured and incapacitated their father before Alexia coldly injected him with the t-Veronica virus. But the experiment was a failure and Alexander’s body could not cope with the virus which rapidly destroyed his brain cells and transformed him into a hideous monster. Alexia used the findings from this test to further refine the virus and theorised the human body would only be able to adapt to the virus if it was introduced to the human circulatory system at a rapidly reduced rate, allowing the natural immunity system to create anti-bodies to protect cellular breakdown.

She now planned to inject herself then immediately enter a cryogenic sleep where she would be frozen and her vital signs slowed right down. Her calculations predicted it would take 15 years for her body to adapt and co-exist with the Veronica virus. In late December 1983, Alexia carried out the experiment and was sealed away on B6 level of the South Pole lab. She had no choice but to trust her safety to her loyal but inept brother but Alfred’s blind devotion ensured he would never allow her exposed form to come to harm.

As a cover, a statement was released across all of Umbrella that Alexia had died in a laboratory experiment. All records on t-Veronica were sealed shortly afterwards and the project was officially scrapped. William Birkin’s work soon recovered following the loss of his biggest rival and he forbade his colleague Albert Wesker from trying to access Alexia’s work.

15 years later in late December 1998, Alexia awoke with a great power harnessed inside her body. Her first sight was that of her dying brother, his last act being to awaken her from her slumber. Alexia’s body had harmonised with t-veronica and she maintained her human form. More details regarding this are here.

She synthesised a sample of the stabilised Veronica strain from her own blood and injected it into Steve but like Alexander before him, his body could not cope and he suffered rapid cellular breakdown and mutated into a monster.

Alexia planned to use the Veronica Virus to bring the entire planet under her control but she was eventually thwarted by Chris Redfield who destroyed her with the Linear Launcher, a weapon ironically developed by her own hated father.