Alfred Ashford was twin to Alexia and a product of the classified Code: Veronica project. However, Alfred’s very existence was not planned as the goal of the project was to create a female replica of the great family matriarch; Veronica. He was simply an unexpected by-product and his sister Alexia was the real payoff, though his father Alexander did his best to keep this secret from him. Although the focus was on Alexia, Alfred was subjected to the same early aptitude tests given his genetics had been modified with the artificially stretched intelligence gene. Results showed he was of above-average intellect but not strong enough to be classified a genius. He was raised at the South Pole base alongside Alexia and developed a strong bond with her. He worshipped the ground she walked on and was utterly devoted to her. But this love was not reciprocated, at least not on the surface as Alexia viewed Alfred only as a toy for her to utilise and further develop her own interests. 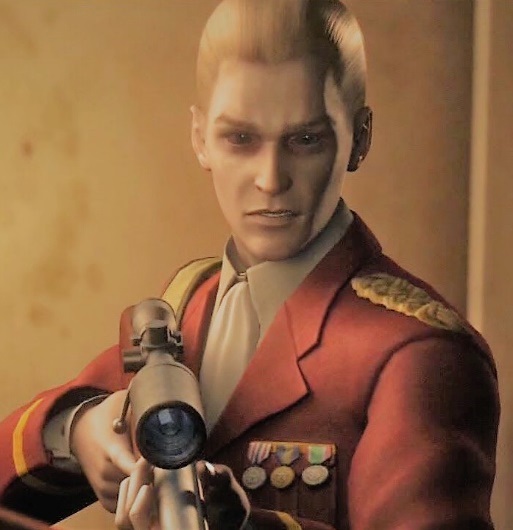 With Alexia groomed to take over the Ashford t-Virus research, Alfred was mainly left to his own devices and never trained as a scientist. He spent his days exploring every nook and cranny of the facility and became fascinated with an off-limits area located behind a secret door in the main hall mansion replica. His father presented him with a ring containing a blue jewel that symbolised proof of Ashford family linage, and Alfred soon discovered the hidden door required three symbolic ‘proofs’ in order for it to open up. It remained an ever intriguing mystery to him, fuelled even further by his father’s insistence he keep away.

But by February 1983, Alexia managed to get hold of Alexander’s green piercing and it along with his own blue jewel and the red emerald from Alexia’s pendant was enough to get him inside the hidden door. Inside he found the secret laboratory facility and discovered the horrible secret behind the birth of Alexia and himself. Enraged, he lost all respect for Alexander and began hating him. He plotted with Alexia to capture their father and use him as a test subject for her new t-Virus; the t-Veronica. But the experiment was a failure and he mutated into a horrible monster. The twins decided to keep him alive and kept him
locked away in a hidden room of the base.

Officially Alexander had disappeared and Alfred was made the next official head of the Ashford family at 12 years-old, under the guidance of the butler, Scott Harman. By now, Alfred had taken to wearing crisp military attire and dressed as a traditional British General. He also used the family fortune to begin an extensive and impressive collection of military weaponry, including a pair of gold-plated lugers. This sudden devotion to all-things military was a result of Alexia referring to him as her ‘soldier ant’ and only served to highlight his deluded devotion to her.

Like Alexia, Alfred’s sanity was clouded due to the artificial manipulation of his genetics, though his instability was not as elevated as that of Alexia. He bore no desire to rule the world but would happily endure the suffering of anyone and everything if it helped his sister in any way. He had a child-like mentality and had numerous his and hers toys and merry go-rounds installed around the base. He had grand bedrooms designed and installed in the lab which were later replicated when the private residence was constructed on Rockfort Island years later. He bore a severe cruel streak and one time even made a home movie of Alexia and himself pulling the wings off a live dragon fly and feeding it to ants.

Following the failed experiment on Alexander, Alexia deduced she needed to go into cryo-sleep for 15 years in order for her body to adapt and cope with the virus once injected into her own body. This meant that Alfred would be without his sister for well over a decade. Once Alexia had been put to sleep, only Alfred knew she was still alive. With Alexia gone, the Ashford’s t-Virus research fell into a sharp decline once again and it was now believed the family would be forever tarnished, even cursed. No one from Umbrella expected anything of note from Alfred and he was left alone to do as he wished. Now on his own, Alfred continued collecting his military antiques and building up his collection, again a sign of him taking Alexia’s label too literally. But alone and without his sister, he began to suffer from depression and his mental state got increasingly fragile. To help him cope, his mind created a fictional persona, a young woman named Tanya whom Alfred believed was inside Alexia’s frozen cryotube. Because Tanya was now the sleeping t-Veronica experiment, this meant Alexia could still be with him at all times. He would often talk to Alexia and slowly began to genuinely believe she was still at his side.

Whilst Scott Harman and his late father’s aides attended to the Ashford estate, Alfred was sent back to England to attend a prestigious university, and when he graduated several years later in 1993, he was made a company executive and Director of the South Pole facility, but this was done to largely appease him and keep him out of the way. In addition, he was given full control of Rockfort Island; an isolated Umbrella compound located at the southernmost point of South America. Given his family linage, Alfred viewed it as in insult he was given such a lowly position on a backwater facility and became very embittered with Umbrella. He never realised this was a deliberate ploy to prevent the Ashford’s from attaining any future influence in the corporation. Regardless, Alfred oversaw construction of a military training facility on the island for Umbrella’s various paramilitary units to train and also a prison where he delighted in torturing and tormenting the inmates. He colluded with the chief anatomist to experiment with the prisoners in a secret underground chamber, subjecting them to devices and techniques designed to inflict maximum amounts of pain. He later ordered construction of a private mansion complete with replica bedrooms from the South Pole base. The mansion also contained many dolls posed in strange, unnatural positions and child-like artefacts that further highlighted Alfred’s fragile mental state. He had the prisoners construct a large bridge over the water channel leading to the mansion then cruelly killed every single one of them to preserve its secret.

Alfred squandered his responsibilities by using the island for his own private torture facility. He also had a strange obsession with adorning the base with military collectibles and converted the basement of the training facility into a ‘Kill House’ obstacle course for the military units training there. To Umbrella, Alfred was an encumbrance; nothing more than a petty dictator attempting to emulate greatness that was far beyond his reach. With no one to counsel him, his mental breakdown accelerated as he spent his days obsessing over the restoration of his family’s power. By this point he had taken to dressing up as Alexia as his split-personality disorder took over his mind. Staff on the island were never allowed to see Alexia and she remained isolated in the private residence atop the hill. Anyone who even so much as asked about her, risked receiving Alfred’s wrath. Every year, Alfred and ‘Alexia’ would go to visit ‘Tanya’ at the South Pole base to celebrate her birthday.

In 1998, long-serving butler Scott Harman could see that Alfred’s mental state was in clear decline and he fled from the family he had served so loyally for generations. This proved to be a wise decision for when Alfred’s private attendant Robert Dorson caught a glimpse of who he believed was Alexia in a bedroom window, Alfred had him locked up and thrown in the prison. He was later given to the island’s anatomist as a gift.

In December, the island was attacked by Albert Wesker and a Special Forces team sent by the rival company. Alfred mistakenly placed the blame for the attack on Claire Redfield; a civilian who had only recently been brought to the island. Claire and an escaped prisoner named Steve Burnside discovered Alfred’s cross-dressing secret during their attempts to escape.

Alfred later fled the island and headed to the South Pole facility. There he was mortally wounded by Steve Burnside and in his dying moments, he made his way down to the depths of the lab where his last act upon this world was to awaken his long-sleeping sister. His last sight was seeing his beloved Alexia emerge from her slumber before he died.