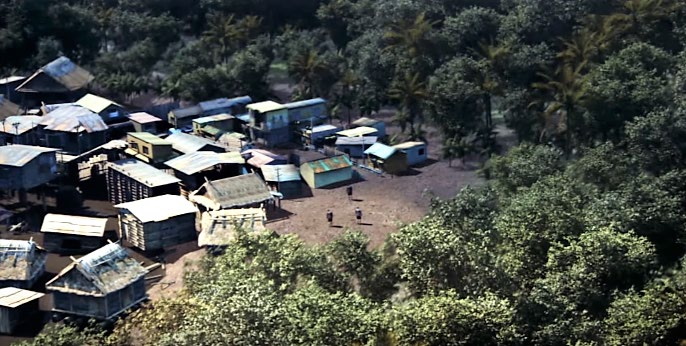 Amparo was a small country located in South America and its territory included sections of the Amazon rainforest and river. There was nothing significant about the area but it was prone to disease, with many locals falling victim to an extremely rare form of cancer that medical experts believed was indigenous to the region.

Ampar0 was also under the rule and dictatorship of Javier Hidalgo and his Sacred Snakes crime syndicate. His organisation had taken de-facto control over a large area of jungle by the Amazon River and he ruled the entire area absolutely. The small government was unable to do anything about Javier’s control of the drug trade. The merchandise produced by the Sacred Snakes had been contaminating surrounding countries, as well as finding their way into America. Javier was amassing a fortune in drug money, building up his own private army, and fortifying his operations. He was a wanted criminal in many countries, and was an uncommonly cruel man.

Amparo itself was very beautiful and home to a diverse haven of flora and fauna under a tropical climate.

MIXCOATL VILLAGE: A small village constructed on the basin of the Amazon River. Although originally a peaceful place, by the early 21st Century there was growing animosity toward Javier’s cold and merciless organisation and many locals were waiting for the opportunity to rebel. The influential and powerful people of Mixcoatl village (affectionately known as Waterside Village), as well as the United States and the local government formed a coalition to expel Javier, and had been amassing military strength behind the scenes.

The village was small and home to only several hundred people. The main square was very sparse and a large well provided the main fresh water supply. Ramshackle buildings ran throughout town and the village boundary was marked by a heavy wooden fence depicting messages and photographs of recently missing girls. The main marketplace contained a number of small stalls and shops, each selling local produce and delicacies. There was also a butcher’s stall selling fresh, locally-sourced meats. The houses were located to the rear of the village, all built upon constructed wooden walkways running just a few feet above the surface of the water below. There was also a small school and a church located here.

JAVIER’S DAM: A large dam built under the direct order of Javier. It had a total reservoir storage capacity of 20 billion tons and provided a solid power source to the surrounding region. Inhabitants of this remote area who previously didn’t have adequate electricity felt indebted to Javier for having brought them the power generation facility. It was also touted as having contributed to raising the standard of living and financial status of his organisation. Originally it was built to secure a large source of electricity to be used solely by the Sacred Snakes and also as a nonverbal threat to districts under its control. The dam had a complex floodgate allowing Javier the ability to release and induce a massive flood disaster on areas downstream whenever he pleased. One such documented example had Javier cause an intentional water discharge “accident” in an area inhabited by a defiant tribe. The entire village of 80 people was killed.

JAVIER’S MANSION: An expansive compound in Amparo nestled deep within the jungle. This place was only Javier’s private residence; the base of his criminal organisation was located elsewhere. But even so, this compound was very well-protected against invasion by guerrillas and government forces. Although its standing mercenary garrison was small, numerous B.O.W.s, traps, and defence systems were deployed all around. Rather than “residence”, the term “fortified castle” would be a more appropriate descriptor for this well-guarded compound. There was also a bomb shelter in the basement to which Javier could retreat to in an emergency. The compound was also built to withstand such extraordinary situations as floods and natural disasters.

A t-Virus outbreak was documented in Amparo in 2002 when all of the above locations were reported as infected. The source of the infection was down to Javier Hidalgo himself. His daughter had ran out on him and in his rage he had unleashed the virus across the local area with no regard for the local populace or wildlife ecosystems.