Andy Holland led a largely miserable existence with a small background in science before eventually resorting to a life of crime. Over the years he conducted numerous burglaries, robberies and assaults in order to make a living. He lived in a run-down old apartment and was in default with the rent. A small, stumpy man as well as overweight and almost completely bald, he was very private and liked to keep himself to himself, becoming very grumpy when in the company of others. His hobby was photography and he owned a Polaroid camera he treated as his best friend.

In around 1997 he got a call out of the blue from representatives of Umbrella Corporation, offering him a job as caretaker and curator of a sewer facility on one of their many off-shore outposts. This particular job was at a place called Sheena Island, located somewhere in Europe. Some time ago Umbrella had purchased the solitary town on the island in its entirety so the families of workers could come out to live there. Underneath the city was a sewer system and treatment facility that was so old nobody knew how to repair it. Now Umbrella wanted to give the maintenance contract to him. Andy was more than a little suspicious of their intentions at first but what was on offer was easily better than his current life. His criminal record was so extensive he had next to no chance of ever holding down an honest job in America, so this new start was exactly what he needed. 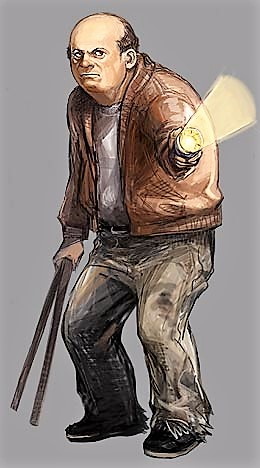 Leaving his defaulted apartment behind for good, Andy crossed over to Sheena Island, and based himself permanently in the sewers, making a crude bedroom and living quarters in one of the underground maintenance rooms. Using spray paint, he scrawled graffiti over the outside walls and door, warning people and trespassers to keep away. Andy spent over a year living in solitude, carrying out his duties whist ignoring the residents of the town living and working above him. He built up a strange obsession of photographing the town’s waste flowing through the sewers and decorated his living quarters with these pictures. Andy was happy at being left alone and because he kept himself away from everyone else, had never fully grasped the truth behind Umbrella and their more sinister practices.

In the summer of 1998 Umbrella operations on Sheena Island were transferred over to Vincent Goldman, an elite sent By Umbrella headquarters as the island’s commander. Although he never met him, Andy heard several disturbing rumours about Goldman’s conduct, including the experiments performed on children at the Tyrant Plant on the mountain. On November 9th, Andy finally met Goldman face to face when he came down to the sewers for an inspection, or so he thought. The real identity of the man was Ark Thompson, a private investigator hired to look into Umbrella’s dealings on the island. Ark was posing as Vincent Goldman to gain information but Andy was none the wiser having never seen Goldman before. He tried to take a picture and ‘Goldman’ became upset and  stormed out. Andy dismissed the incident as Goldman simply being just rude and unpleasant, but in reality Ark was angry as he didn’t want his cover blown.

The next few weeks passed without incident until the real Vincent Goldman unleashed the t-Virus across the town in retaliation for the section leaders conspiring against him and trying to get him removed from his position. Andy survived the initial biohazard and managed to make it above ground, where he decided to hunt Goldman down and kill him himself. However, because of the incident that had happened weeks earlier in the sewer, Andy ended up chasing Ark Thompson around the city, believing him to be Goldman. He shot at Ark in the arcade and then trapped him in the library with a Hunter. But he eventually retreated when Umbrella’s clean-up crews arrived on the scene.

Whilst his body was never recovered it was assumed Andy Holland never made it off Sheena Island alive. It is speculated he either met his end at one of the many B.O.W.s roaming the town, or was shot and killed by the Under Taker clean-up unit. However, the possibility remains that he somehow survived.