Annette Birkin’s early life details are unknown, but she trained in the sciences and gained employment with the Umbrella Corporation sometime in the 1980s. She was stationed at the Arklay laboratories as a researcher and later met William Birkin. She was inspired by his ground-breaking work on the t-Virus and became close to him. Eventually they started a relationship and were soon married. Annette seemed to be the only thing William would ever take time away from his research for. In 1986, she gave birth to their first and only child, a girl named Sherry. But despite being a new mother, she threw herself back into the research out of love for her husband.
In 1988, William Birkin discovered the G-Virus inside Lisa Trevor and changed the futures of both of them. Annette was convinced that if approved, the G-Virus would be the pinnacle of her husband’s career. 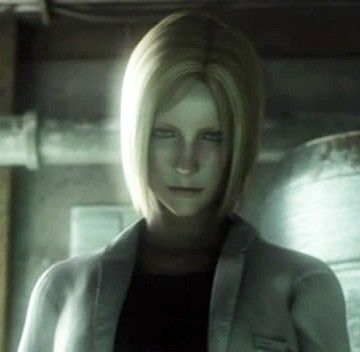 In 1991, Oswell Spencer approved Birkin’s G-Virus project and Annette was chosen to participate, transferring with her husband to a new state of the art research facility constructed beneath Raccoon City itself in 1993. Once based in the new lab, Annette’s role was to monitor communications with outside parties, and it was though this role that she became acquainted with police chief, Brian Irons. Annette was so blinded by her love for her husband and his work that she often neglected Sherry, and the little girl spent a lot of time alone. Annette never told her about the nature of their research, but in case of an emergency she gave her a keycard that would allow her access through the restricted sections of the underground sewer network.

In 1998, following the mansion incident, the surviving S.T.A.R.S. members had learned of the in-development G-Virus. Annette acted as a liaison between William Birkin and Chief Irons and monitored police activities. As William neared completion of the new virus, Annette began to realise just how much they had consumed themselves with their work. She began to spend more time at home with Sherry and they didn’t see William for over a week. This prompted her to write a letter to him asking him to consider her and Sherry more and for them to be the family their daughter had always wanted them to be.
Annette was working at the lab the night Hunk’s U.S.S. team breached and shot William in an attempt to retrieve a G-Virus sample. She desperately tried to find medical supplies to help her husband, but whilst she was away he injected himself with the G-Virus and mutated. Birkin then went on the rampage, decimating Hunk’s team and destroying the stolen sample case which caused the t-Virus to leak into the sewers and be spread by rats. Realising the city was about to be consumed in a biohazard, Annette quickly contacted Sherry who was at school at Raccoon East Elementary and told her to quickly get to the police station where she would be safer. Annette knew Sherry had a sample of the G-Virus hidden in her locket and her plan was to retrieve it and continue her husband’s research to complete his legacy. However, for reasons unknown, she failed to rendezvous with her daughter.

Umbrella’s betrayal had left Annette extremely paranoid. She recognised Ada Wong to be a spy working for the rival company after recognising the same alias she used to infiltrate the Arklay Labs and get close to John Clemens. She also suspected Leon Kennedy and Claire Redfield of being spies trying to steal her husband’s work. Eventually, Annette was fatally attacked by the monster that was once her husband. The image of her own daughter, hovering between life and death, came to her mind. Just before she died, she recovered her senses enough to provide Claire Redfield with instructions on how to prepare the G-Virus vaccine; Devil. Then, after speaking of her regrets as a mother and leaving sincere words of apology for her daughter, she succumbed to her wounds and died.