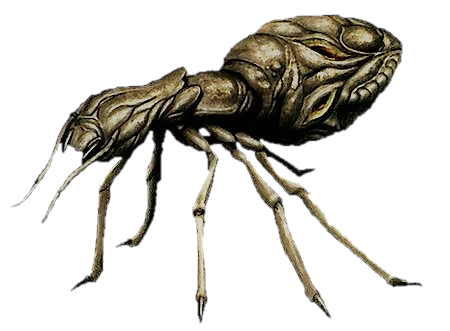 From an early stage, the ant was explored as an attractive candidate as a B.O.W. base due to its high breeding potential, superior environmental adaptability and aggressiveness towards other creatures. But because their intelligence did not develop to the extent they could be controlled as a result of mutation by the t-Virus, Umbrella researchers concluded the risk of them going out of control were too great and plans for weaponisation was shelved. But the development of the t-Veronica virus some years later solved this problem.

Ants were a prominent part of the t-Veronica project and injection of the virus led to hugely increased growth and hostility. These ants grew to the approximate size of a rat and would attack whatever prey they could find with their large pincers. The virus enabled them to adapt to the sub-zero temperatures of the Antarctic and they also reproduced in large numbers. The queen ant genes contained within t-Veronica ensured the infected insects gained a property that made them completely subservient to a higher existence. The ants bred in the South Pole base completely followed the commands of their queen, Alexia.

They built a colony within the Alexia-Pod plant growing in the lower section of the control room. When Alexia put herself into suspended animation for 15 years, the ants guarded and protected her from any intruders whilst she slumbered. When she emerged, the ants existed only to serve her as slaves and were fully obedient to her commands. Alexia planned to use these insects to spread the t-Veronica virus across the world.

In later years, the Veronica Virus was used to infect South American ants in the country of Amparo. These ants were practically identical with only minor differences down to the base species of the infected ant. They were re-evaluated but their potential use as B.O.W.s still harboured a major flaw. Because it was necessary for a human to adapt to t-Veronica over a long period of time in order to have powers like Alexia, a battle commander could not be prepared easily. But if this problem were to be solved, it may be possible for controlled ant-based B.O.W.s to be deployed in combat.