Ark Thompson was a Private Detective and a close friend of Leon S. Kennedy. He was a cheerful and friendly man, well-trained in investigation and infiltration techniques. He also possessed a set of stamped dog-tags, hinting at previous military training. Following the Raccoon City incident, Leon had taken up a position with the U.S. Government and his intelligence investigations into Umbrella led him to Sheena Island in Europe. He called on his friend Ark and hired him to infiltrate the island and investigate the corporation’s dealings there. Ark conducted background research and discovered the island had recently appointed a new commander named Vincent Goldman. He had an infamous reputation and because the islanders had only heard, but never seen Goldman, Ark decided to pose as Vincent in order to obtain potential information about Umbrella’s illicit dealings. 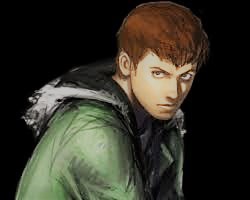 Ark arrived in October 1998 and his first point of contact was the janitor of the sewers, Andy Holland. But when Andy took a picture of him, Ark became angry in fear it could expose him as an imposter. This caused Andy to become fearful of him. But although Andy kept the photograph private, neither of them realised their conversations were being watched by Lott Klein, the son of an influential Umbrella researcher who worked closely with the real Vincent Goldman. Lott knew what Goldman looked like and realised Ark was a spy. He told the real Goldman of this and the island’s commander began to search for Ark.

Sometime later, Ark successfully infiltrated Umbrella’s main headquarters on the island and obtained evidence of biological weapons research. He managed to destroy part of the laboratory there before he was discovered. When Goldman later unleashed the t-Virus across the island, he caught Ark going through his private office. The two had a scuffle and Ark tried to escape in a helicopter, with the resulting confrontation ending up with Goldman apparently being killed and Ark crash-landing. The crash caused Ark to suffer from memory loss, leaving him with no idea who he was or where he was. He came across Goldman’s body, who in an ironic twist, was holding Ark’s ID dog tags, and thus making him believe that he was Goldman’s real identity.

Ark tried to atone for his apparent wrongdoings by saving the lives of two children he had caught glimpses of in the main Umbrella building. When he finally caught up with them, Lott Klein explained that he was not Goldman, but the detective named Ark Thompson. He also confessed he kept running away because he was the one who had informed Goldman that Ark had arrived as a spy on the island and therefore was scared. Following this revelation, Ark’s memory began to return and he recalled coming to the island at the request of his friend, Leon. He was then confronted by the real Goldman in the Tyrant Factory, and the Umbrella officer was killed by the released Hypnos T-Type Tyrant. After taking an underground railcar to a private heliport at the edge of the island. Ark finally killed the pursuing Tyrant and escaped via helicopter with both Lily and Lott Klein.