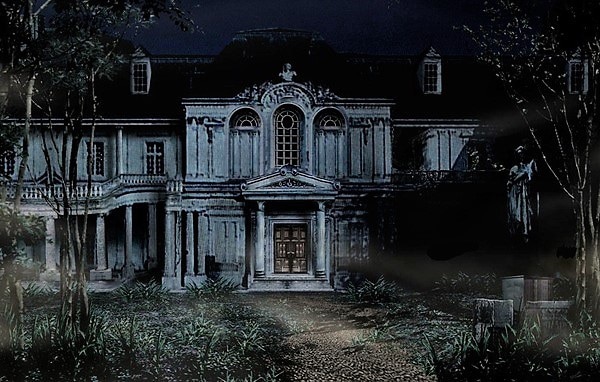 The Spencer Mansion was the brainchild of prominent New York architect George Trevor and represented some of the finest work of his distinguished career. After Oswell E. Spencer outlined his wishes for his own private getaway on the outskirts of Raccoon City, Trevor visited his office in 1962 with a collection of impressive design plans that were immediately approved. Despite a last-minute change of construction company and some minor alterations to the designs such as the abolishment of the billiard room, construction went ahead with no major issues or delays. Five years later, the building was completed, and a few months after that the secret underground laboratory facilities went online. The mansion itself was to act as a front for the hidden research areas below that would go on to produce decades of illegal bio-weapons research. For added security, some of the laboratory layout had access ways not incorporated into Trevor’s original schematics.

The Estate was located deep in the backwoods of Raccoon Forest in the Arklay Mountains, some distance away from Raccoon City and several miles away from the Management Training Facility which opened a year later in 1968. The main mansion building consisted of two main floors serving as an executive guesthouse for Umbrella V.I.P.s and senior research staff that lived on site. Each room was lavishly furnished, filled to the brim with expensive art pieces, paintings and sculptures. Highlights included an expansive dining room, library and grand hall. There was also a basement level as well as a large attic space for storage. The estate also covered many acres of garden landscape, expanding into the forest and housing two small graveyards. There were four main master keys for the various rooms of the house, each symbolising that of a knight and therefore broken down into Armour, Shield, Sword and Helmet respectively.
On the other side of the garden was a Guardhouse dormitory for lower level employees which also included a rec room and entertainment facilities. Beneath the guardhouse was a giant Aqua Ring used for water-based experiments and B.O.W. specimens. There was also a heliport on site and access to the main underground labs came via a hidden elevator concealed beneath a water feature in the main courtyard. Both the wolf and eagle medals were needed to access this area and it was down here that many of Umbrella’s early heinous creations were born.

Albert Wesker and William Birkin were stationed here as Chief Researchers during the 1970s and 1980s and it was also here that the G-Virus was born and the ultimate biological weapon, the Tyrant, was created. The underground labs consisted of four floors, the first of which contained access back up to surface level, a ladder leading down to the next basement level and a passageway leading to the elevator for the heliport. The 2nd basement level housed the Visual Data Room where archival data was stored. This room was also used for meetings and presentations. The passage outside had a stairwell down to the next level. B3 contained a computer room, several experimentation rooms, and a morgue. It also housed the Power Maze, which was the source for the whole estate’s power supply. It also contained the lab’s self-destruct mechanism. Finally an elevator led down to B4 level which housed the main culture laboratory. This room was used for special research projects such as the Tyrant program. A small sanitation prison was also located on this floor, yet it could only be accessed via B3 level.

The whole estate enforced high security and was laced with traps, secret rooms, trick-locks and hidden passageways. Also accessible from the garden and courtyard areas was a network of subterranean abandoned mining tunnels. These labyrinthine, maze-like passageways were perhaps a major influence in Spencer’s decision to build his home here. Behind the mansion there was a large underground crypt, where the Crimson Head Prototype 1 was kept. Four death masks were required to release it. The mansion had a research staff of approximately 25 as well as a security team on site. It was destroyed on July 25th 1998 following activation of the triggering system due to an emergency biohazard situation. The entire estate was destroyed.