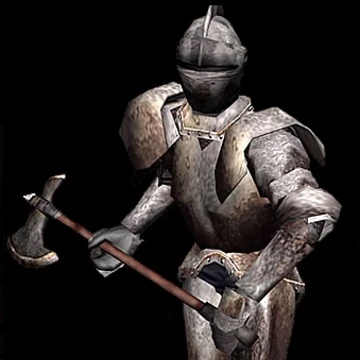 Armadura means “armour” in Spanish. There are two types, one with a simple armour and another with a full body armour. A loose Plaga in search of a host will crawl into a suit of body armour on display in the old castle and take control of it. Inside the armour, the parasite maintains its life status in a state of hibernation and waits for its prey to come near. The Plaga has tentacles which it attaches to the inside of the armour composed of tissue resembling the muscular system of humans. This allows them to mimic basic motor functions.

They are capable of stilted movement over short distances and can launch attacks with swords or axes. These attacks are clumsy and any hardened impact off the floor will cause the armour to come apart and collapse completely. It is not known how these Plagas are able to imitate basic human behaviour but it is believed to be instinctual. For example, if an Armadura’s empty helmet is blown off, the parasite will emerge from the neck in the exact same way a regular Ganado would should its host cranial cavity be destroyed. Because the Plaga resides within an artificial armoured shell and not sealed within flesh and bone, they are susceptible to bright light even if fully concealed and will fall to a flash grenade.