Ashley Graham was the daughter of President Graham who first came to term in 2004. Her upper class upbringing had made her somewhat headstrong, but she had an optimism that made her truly fearless. Her mannerisms were somewhat childish but she had a mature sense of style to compensate.

In 2004 Ashley was a student at a university in Massachusetts and was on her way home when her security detail was ambushed and she was kidnapped. Her abductor was former U.S. SOCOM operative Jack Krauser who took her to the Los Illuminados cult in an isolated village in Southern Europe in order to gain the trust of their leader, Osmund Saddler. Her kidnapping was kept a secret from the public and only a handful of people within the U.S. administration were made aware due to fears it may have been an inside job. 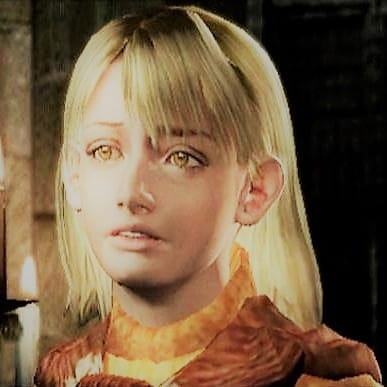 Intelligence gathered from the Secret Service pointed to a region in Southern Europe after a sighting matching Ashley’s description had been made. Leon S. Kennedy, who had originally been scheduled to join Ashley’s security detail, was instead dispatched alone to locate her. The Los Illuminados had unleashed the Las Plagas parasite on the unsuspecting locals of the village, turning them all into mindless Ganados that could be manipulated by a Dominant Plaga holder. Their plan was to inject Ashley with the same parasite and send her back home where she would slowly infect the U.S. government from within.

After her injection, she was kept locked up in a church on the outskirts of the village. The cult’s plan was to keep her in isolation until the Plaga egg hatched inside her and the parasite grew to maturity. However, she was rescued by Leon before the Plaga took hold of her central nervous system and she was still in full control of her body and mind. As they tried to escape, signs of assimilation began to surface such as the coughing up of blood.

But the growth of the parasite was supressed somewhat thanks to pills given to them by rogue scientist, Luis Sera. At first, Ashley was understandably panicked about the unspeakable horror growing inside her body, but eventually she calmed down enough to joke about it, and was even able to help Leon out of a few scrapes herself. Seeing her tenacity in the face of such a cruel situation gave Leon the courage to go on. Ashley was captured several more times during their escape and was forced to take part in a ritual that made her an official member of the Los Illuminados. But eventually Leon rescued her once more from Saddler’s island and they used a machine built by Luis that generated a special radiation to kill off the parasites within their bodies.

Once they had safely escaped and were on their way back home, Ashley, perhaps as a result of her tremendous relief, began to show an intense interest in Leon and propositioned him, only to be politely turned down. However, she did not seem too disappointed, perhaps sensing that there was something more to Leon’s relationship with the mysterious female known as Ada Wong who had helped them defeat Saddler’s final form. Ashley was returned home and re-joined with her family