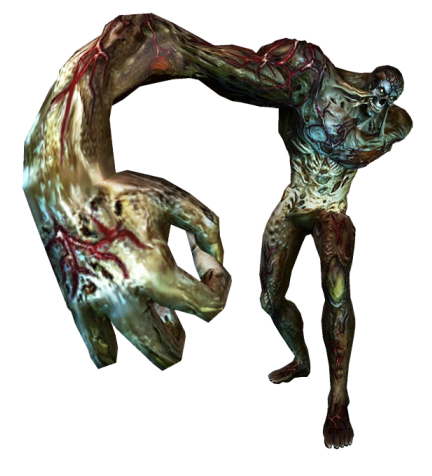 The Bandersnatch was a unique product designed to capitalise on research carried over from the Tyrant Program. It was to be a mass-produced prototype based on the Tyrant, but purposefully manufactured for practicality as a single weapon rather than perfection. Like the Tyrant, the base organism was a human, but because no attempt was made to keep it realistically human-looking for infiltration purposes, it developed a disfigured and distorted appearance with a yellow/brown skin tone covered with exposed arteries and blood vessels originating from a hole in its left shoulder. In addition its lower body degenerated way beyond expected levels which limited its mobility and furthermore its left arm was all but non-existent, forcing it to rely on its right arm completely. But the Bandersnatch was able to overcome these faults by its right arm developing an extendable and almost elasticated form.

Researcher have noted this unique trait was very similar to the ability found in the Thanatos Tyrant developed by Greg Mueller once that particular specimen became injured enough to disengage its power limiter. Also like the Bandersnatch, the Thanatos’ left arm became smaller and useless with its right becoming significantly more powerful to compensate. The Bandersnatch’s ability to latch onto things with its extendable right arm and pull itself around is an ability not recorded in previous B.OW.s and allowed the creature to track its targets quickly and with great precision. Its right arm had great flexibility and could be flailed around like a whip or to grasp hold of targets and crush their skulls.

With its considerable attack power and durability, most other creatures feared the Bandersnatch despite it doing nothing more than attacking repeatedly with its right arm. But a significant weakness proved to be a lack of protection to the head. A lack of left arm meant the creature could only protect itself with its right, leading to a poor imbalance between attack and defence. Despite the creature being much cheaper to produce that a Tyrant, it was significantly weaker and the highlighted flaws made it undesirable as a weapon going forward. What prototype specimens were developed were housed at Rockfort Island and further development was halted following the biohazard in December 1998. The project was later discontinued when it was confirmed the Bandersnatch development data was secretly obtained by the rival company. The creature was codenamed after its namesake in Lewis Carroll’s Through the Looking Glass.