Barry Burton was a proud family man and thoroughly dedicated to his career as a law enforcement officer. He was originally a S.W.A.T. team officer before enlisting with the U.S. Air Force and becoming acquainted with Chris Redfield after they served in the same unit together. After completing his service, Barry was scouted for the Raccoon City S.T.A.R.S. team thanks to his extensive experience and unrivalled knowledge of firearms. He worked closely with Albert Wesker in recruiting the other members and recommended Chris Redfield for the role. Outside work, Barry was a family man through and through, utterly devoted to his wife Kathy and their two daughters, Moira and Polly. He always carried a family picture of them all in his wallet. Although not a fan of modern technology, Barry’s hobbies included fishing and collecting and restoring firearms. He was also a member of the National Rifle Association.

He was close friends with Enrico Marini and gunsmith Robert Kendo. Robert provided customised firearms through his shop based on Barry’s recommendations. He was also good friends with Robert’s brother Joe and together they worked on various customised versions of the Beretta M92F Special, later known as the Samurai Edge. Barry and Robert often went on fishing trips together to the neighbouring town of Stoneville. He was also a frequent patron of J’s Bar in central Raccoon City. 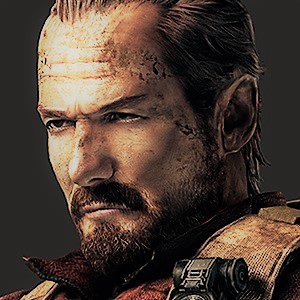 Barry’s personality was mild-mannered and emotional, with a strong sense of duty and responsibility. As one of the senior members of the team, he was well respected and trusted by all of his S.T.A.R.S. colleagues and was often the first person people would come to for advice. Whilst on field missions, Barry’s preferred gun was not the Samurai Edge, but a .44 Magnum he kept well-maintained. The way he treated that gun as an ‘old buddy’ showed Barry in his most natural state. His efforts in the field resulted in many successful missions.

Barry was part of the S.T.A.R.S. Alpha Team unit that became caught up in the infamous mansion incident of 1998. Just prior to the incident, he had ordered a new gun from Kendo’s called ‘Raging Bull,’ but because of all the calamity, he never got to go and collect it. Prior to the mission, he was blackmailed by Wesker who revealed himself as an Umbrella agent and bluffed Barry’s family had been taken hostage as collateral for Barry to obey his every command. Just before Alpha Team left Raccoon City, he secretly stashed a rocket launcher in the helicopter and only told Brad Vickers of its existence. On the evening of July 24th, Barry and the rest of Alpha Team touched down in Raccoon Forest after finding the smoking remains of Bravo Team’s helicopter. After being chased into the mansion by a pack of Cerberus dogs, Barry began investigating the estate alongside Jill Valentine to look for his missing teammates but was caught up in Wesker’s scheming. He had secretly lured the S.T.A.R.S. to the mansion on Umbrella’s behalf so they could measure the combat effectiveness of the escaped B.O.W.s. With Wesker’s threats, Barry complied with his orders and kept Jill Valentine alive long enough so that she reached the lab to confront the Tyrant to test its battle abilities. But not being able to live with the guilt of betraying his friends any longer, Barry hid in the lab whilst Wesker taunted Jill. It was then that Barry realised Wesker’s threat to his family was just a bluff. He quickly returned to save Jill and shot Wesker in the shoulder.

Barry survived the mansion incident and helped Chris Redfield plan an investigation into Umbrella’s European headquarters. However, he decided not to fly to Europe with him, choosing instead to make sure his family was safe. He flew them out to Canada and it was there that he became aware of the biohazard that had engulfed Raccoon City. Knowing that Jill had remained in Raccoon to investigate Umbrella’s secret lab, he set out to rescue her. He commandeered a civilian helicopter and flew into Raccoon City airspace just before the sterilisation operation was carried out. He managed to contact U.B.C.S. mercenary Carlos Oliveria and pinpointed Jill’s location at the P-12A Incinerator Facility. Barry evacuated both of them and they flew out of the city just seconds before it was vaporised.
Following the incident, Barry returned to his family whilst Jill set out to find Chris Redfield who had gone missing. In 1999, Barry was reunited with Chris and Jill via an anti-Umbrella movement. He also became acquainted with and fought alongside Leon S. Kennedy. In the following years, Barry stayed largely out of the picture, choosing instead to spend time with his family. But tragedy was afoot when one day he forgot to lock up his gun cabinet and Moira accidentally shot her sister, Polly. Although Polly survived, the incident completely shattered Barry’s relationship with Moira. She was deeply traumatised by what happened and developed a deep-seeded fear of all firearms. Barry took his anger out on her but deep down he knew the incident was his own fault. He spent the next several years hiding behind his own guilt.

In 2004 following the formation of the B.S.A.A., Barry was extended an invitation to join the organisation from his former team mates and became a combat specialist, choosing an advisory role over any S.O.A. position. Although he occasionally participated in anti-bioterrorist activities, he largely stayed out of the spotlight and preferred to spend time with his family. Barry helped train B.S.A.A. recruits and became friendly with Claire Redfield of TerraSave, who in turn had become close to Moira. He was still close friends with Chris and became somewhat of a mentor to the two parentless-siblings. In 2009 he made a point of contacting Chris after the Kijuju operation as the death of Albert Wesker was a significant moment for them all. He was also over the moon that Jill was still alive after all this time.

Because of his experiences with biological weaponry, Barry was firmly against Moira’s decision to join TerraSave, but because of their broken relationship, she ignored his advice and joined regardless. Soon she was reported missing following a raid on TerraSave headquarters by unknown assailants. He hurried to the hospital where Claire Redfield was later found and began his own investigation to find the whereabouts of this mysterious island his daughter was taken to. He began an intensive training regimen to get his body back into the same shape as when he was an active agent and also asked Jill Valentine to put him in touch with Quint Cetcham about developing a successor to his now old and broken customised Samurai Edge. Together they spent several months crafting the new weapon to Barry’s own specifications. Later he used forceful means to ascertain the co-ordinates of a distress call received from Moira by the B.S.A.A. and set off to rescue his daughter, stopping by Quint’s lab on the way to pick up his newly completed Samurai Edge weapon.

On the island Barry encountered Natalia Korda and allowed her to accompany him on the journey. Despite Natalia warning him Moira was dead, Barry refused to believe her and continued the search regardless. Barry was deeply concerned to discover a second living Wesker in the form of Alex and was determined to destroy her following her constant harassing of Natalia. Eventually he fought Alex in her lab and was assisted by Moira who had been alive and well all along. Together, Moira and Barry worked together with Claire Redfield who had arrived on the island by helicopter to destroy Alex for good.
Following the incident, Barry mended his relationship with Moira and formally adopted Natalia as his third daughter.