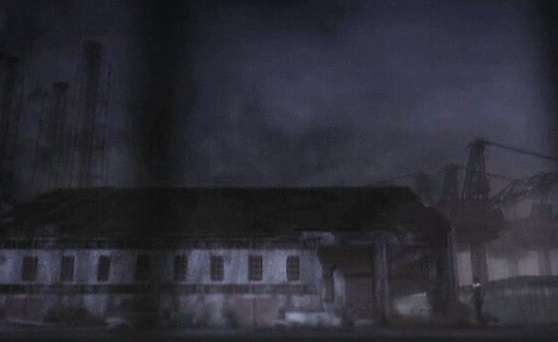 The Waste Disposal Facility was located on a small and very isolated island somewhere in the North Atlantic Ocean. It was a very inhospitable place with freezing-cold temperatures and its main function was the disposal of failed experiments, test subjects, and B.O.W.’s that did not meet the required standard.

The island, although small in size, was privately owned by Umbrella and run under the jurisdiction of the European branch. On the surface, the island was protected from the rough seas by high cliffs and craggy bluffs. There was a jetty and port to greet supply ships and the surface area of the island’s interior was home to an industrial zone. There was a large power plant to generate electricity as well as huge cranes and mining equipment dotted across the landscape. Huge factories and warehouses were present as well as water towers and several abandoned buildings. Below ground was an extensive sewer complex running several miles deep.

Although the island had no official name, it was unofficially referred to as ‘Benthic Island’ and was one of many backwater facilities operated by Umbrella and was of little real importance. It was supervised by eccentric employee named Morpheus D. Duvall. He was a strange man obsessed with beauty and perfection and seemed to care more about general hygiene and worker health management than the actual running of the facility. The workers were not happy with his management style and often complained about him in their personal logs. Life on the island was grim and the location was very bleak and isolated.

The underground facility was split into two parts. The first was the ‘Waste Disposal Station’ which was used to process and dispose of rejected material and creatures. The water channels were also used to monitor the failed B.O.W.s able to roam free in designated and controlled environments. Any changes and evolution was monitored by the research staff. This was where creatures such as the Nautilus and Torpedo Kids were found. Further down was an old heliport located at the bottom of a huge concrete chimney in the heart of the industrial zone. The second part of the facility was the seabed laboratory, located off the coast at a depth of 100 metres. The official name for the seabed laboratory was the ‘Biosphere’, and this was where extensive secret experimentation was carried out. The labs were connected to a waste facility that ran along the waterways down to a fifth basement level. These sewage areas were where all the failed B.O.W.s were allowed to roam free. On level B5 inside a small storage warehouse full of packing crates, an elevator led further down beneath the ocean to where the seabed labs/biosphere was located. The first floor of the labs contained the power supply room and a waste chute as well as a storeroom, warehouse and a clean room. There were two further levels down connected via elevator and a basement containing a moon pool with submarine access and a monitoring and control room. A hidden door was located behind the chair in this room which led to the very bottom of the bio-sphere. This final area was where the missile silo was constructed.

In 1996 there was a serious accident when an experiment codenamed ‘Pluto’ escaped and went riot, killing several researchers. Even by mid-1997 the facility was still in disarray thanks to Morpheus doing little to improve conditions and remedy the situation. Eventually, Umbrella fired Morpheus in August 1998 after making him the scapegoat for the t-Virus leak at Arklay Labs earlier that year.

Not long afterwards, the company cut their losses and closed down the North Atlantic facility. The seabed laboratory was shut down and abandoned completely, although the waste processing station remained operational, with a skeleton staff left on site for continued observation of the failed B.O.W.s roaming free. But at some point following his dismissal, Morpheus returned to the facility and employed an architect to construct an elaborate missile silo within the lowest level of the biosphere. Construction continued over the next few years as Morpheus gained numerous followers and got the labs up and running again, although Umbrella themselves were never made aware of this. This was all meticulously planned so that Morpheus could finally get his revenge on Umbrella by launching t-Virus loaded missiles at key targets across the world.

However, his plan was thwarted by A.U.P.I.T.agent Bruce McGivern and Chinese State Security operative, Fong Ling. Presumably the island was sealed off and left completely abandoned afterwards.