Bindi Bergara was a student at the prestigious Marhawa Academy in rural Asia. She was a grade A student, very intelligent and was well respected by her peers. She was also very outspoken and sometimes clashed with Mother Gracia, who ruled over the school with absolute authority and would not let anything threaten its impeccable reputation.

Bindi uncovered numerous cases with students involved in or subject to harassment, violence, bullying and even attempted suicide. Yet she had heard nothing about any of these incidents because it had all been covered up by Gracia. The police were never called, outside medical help was never requested and no form of counselling had been offered. As time went on, Bindi began to think of ways to change this incorrect policy 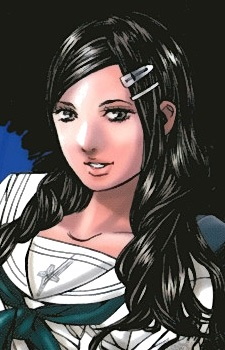 At the beginning of their senior year, Bindi met a new student called Nanan Yoshihara. Nanan’s family had owned a world famous restaurant business that had recently gone bankrupt, causing Nanan to be the subject of relentless bullying because of her family’s poor social status. There was no place for poor people among the elites of Marhawa. Nanan was tough and would often fight back, but one day she was beaten to a bloody pulp and Bindi went to Mother Gracia to complain. Bindi demanded the guilty students to be punished and the police called in to press charges, but Gracia refused to do so, claiming Nanan’s injuries were not serious enough. Bindi was outraged. She had become senior student president because she believed she could change school policy, but now she realised she was powerless to oppose the absolute authority of Mother Gracia.

Eventually, Bindi and Nanan decided to run away from the school and try and expose to the authorities the cover-ups that had been taking place there. However, they were tracked and found by Gracia and her security staff in the surrounding jungle. After a brief struggle, Nanan fell off a short cliff and was left in a coma after hitting her head on a rock. Bindi was distraught, but was forced to return to the school regardless. Nanan’s condition was covered up by Gracia and not even Nanan’s father was informed of her demise.

Soon afterwards, Carla Radames of Neo-Umbrella came to Bindi in her dorm room and handed her a briefcase containing samples of the C-Virus. She told Bindi she was giving her the power to take revenge on the school. Bindi took the virus and injected it into Nanan’s body, watching as she crysallised and was reborn as a prototype Lepoticia creature. Bindi disguised Nanan to hide her mutation and together the two of them began a plan of revenge, starting by infecting all the students that had ever wronged them in the past. When the first zombies started to show up, Gracia had them chained up in the basement of the school, still refusing to bring in any outside help.

Bindi had Nanan infect more students, until Gracia finally relented and brought in an outsider named Doug Wright, an advisor to the Far East Branch of the B.S.A.A. He arrived with his nephew Ricky, who Bindi flirted with, exploiting his weak and naïve personality. Still the zombies increased in number and Bindi enjoyed watching Gracia suffer.

Eventually, Ricky uncovered that Bindi had been behind everything and confronted her. By now Bindi knew she was beyond redemption and injected herself with the C-Virus, gaining incredible strength and becoming a J’avo. She ordered Nanan to infect the entire school whilst she went and found Gracia in the medical centre.

Bindi taunted Gracia about how her kingdom was now ruined and Gracia retaliated by shooting her in the head. However, as a J’avo, Bindi now had extraordinary regenerative abilities and came back stronger, with a mutation similar to a ‘Ruka-Hvatanje.’ She then murdered Gracia in cold blood.

Bindi was eventually confronted by B.S.A.A. agent Mera Biji who wounded her enough for her to chrysallise into a cocoon and be reborn as a Complete Mutation Species, hatching as a large spider-like creature. She was later killed by the B.S.A.A. team as they escaped towards a helicopter.