Bitores Mendez was the Chief of the small Pueblo located within the Salazar territory of rural Southern Europe. After becoming acquainted with Osmund Saddler, he became a preacher of the Los Illuminados religion and Saddler’s right hand man. It was Mendez who persuaded the people of the village to embrace Saddler’s strange teachings and the trust and respect they had for Mendez ensured they willingly accepted the Plaga into their bodies. He was a priest, and as a man of faith, his loyalty to the cult’s leader, Osmund Saddler, was absolute.

He would stop at nothing to eliminate anyone or anything threatening the new world order envisioned by his spiritual guide. He held regular sermons in the church preaching the cult’s dark teachings. 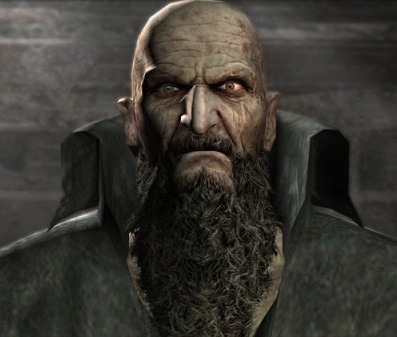 Mendez was a very tall, imposing and intimidating man. His extreme height and broad physique – hidden beneath a dark raincoat – induced fear into anyone who dared to stand in his way. Because he was one of the few trusted by Saddler, he was given a Dominant Species Plaga to retain his free will and allow him to coordinate and control the rest of the villagers. Another key characteristic was his contrastingly coloured eyes, the left one being false. This eye activated a retinal scanner that opened the gate leading to the pathway running up to Salazar Castle. This was seen as a symbol of his determination to be the wall protecting the cult from outsiders.

Mendez lived in relative luxury compared to the other villagers. While they survived on bare bones in sparsely furnished huts and shacks, Mendez lived in his own mansion built on the brow of a hill. The mansion contained a kitchen complete with antique furniture, appliances, and a master bedroom. He was also an educated man given the broad range of topics available in his extensive book collection. Mendez was also in charge of the key for the underground tunnel leading to the church.

In autumn of 2004 when Saddler began the first phase of his world domination plan by kidnapping Ashley Graham, Mendez soon discovered the U.S. Government was sending someone to investigate the village. He had Leon followed and photographs of him passed around the residents, warning them to be on their guard and to attack on sight. He also strengthened the defences around the village and was on hand to capture Leon as he tried to free Luis Sera. Mendez initially questioned why Lord Saddler did not separate his prisoners but decided to trust his master’s judgement.

After Leon escaped, Mendez ran into him again at his mansion, deciding to let him live after realising he had been injected with a Subordinate Plaga. Saddler ordered Mendez to keep an eye on Leon whilst the Plaga matured in his body. However, Mendez was wary after Leon continued to elude the traps they set for him and killed many of their Ganados. Mendez also sensed another party was involved in the incident aside from the U.S. Government and was proved correct when he captured and incapacitated Ada Wong,a double agent working for the rival company at that time. His only mistake was to hand her over to a group of Ganados to perform a ritual kill at the worship area rather than dispose of her straight away himself.

After realising Leon could destroy them all before his Plaga matured, Mendez decided to eliminate him himself and cornered Leon in a barn on the outskirts of the village. After Leon shot a fuel barrel and caught Mendez in an explosion, the Chief triggered his mutation and turned into a centipede-like creature with the ability to separate from his lower torso completely. However, Leon managed to defeat him and his remains were burned away in the barn fire. Upon his death, his false eye fell out and Leon was able to retrieve it to get past the retinal scanner and escape the village.