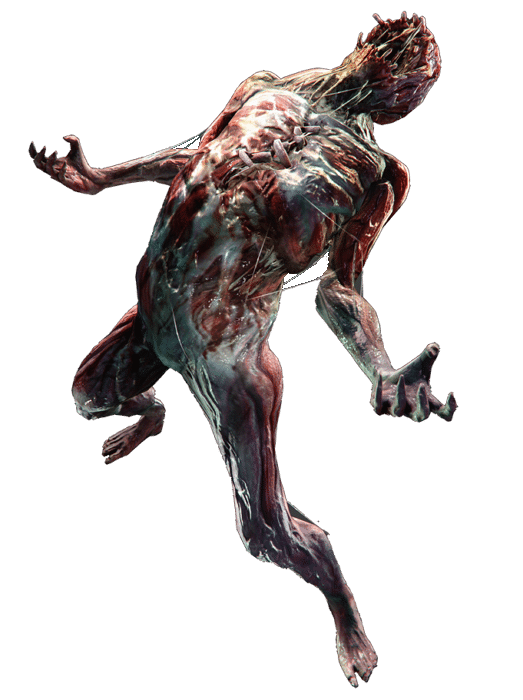 A variant of the C-Zombie.

A Bloodshot is a unique C-Virus zombie mutation triggered when the host’s head is damaged, causing the virus to stimulate rapid changes in the host’s flesh. This results in the creature’s endurance and agility far surpassing that of a regular zombie. The creature is named Bloodshot due to its appearance because the sudden mutation has caused its muscle tissue to become visible. Inflicting enough damage on a Bloodshot will cause its ribcage to open and its heart to become exposed.

The creature’s face mutates, causing the head to crack and the skull to split, leading to the front part of the skull jutting out. Its eyes can hardly be seen due to the stiff muscular structure and the skin on its mouth peels back to reveal fully-exposed gums. Its teeth also enlarge but the ends of the teeth are not sharp like an animal’s yet still take up about half the facial expression. The creature has no brain, but the remnants of tissue still form the shape of an empty cavity. On its back the raised trapezius muscle swells but is also being pulled by the protruding spine. The spine has extended and juts out of the body with spikes following an internal bodily explosion. Individuals susceptible to Bloodshot mutation can be distinguished by their red eyes.

The head is usually a Zombie’s weak point, and an attack directed at the head is usually more effective than an attack elsewhere. In potential Bloodshots, however, the head isn’t a weak point, but instead acts as a kind of switch that triggers this unique mutation. The Bloodshot was first documented during the Tall Oaks bio terror attack. Similarities to the Licker mutation from William Birkin’s Epsilon strain t-Virus has also been noted.