Brad Vickers was born in the small town of Delucia in the USA. He was a member of S.T.A.R.S. Alpha Team and the main helicopter pilot for the team, yet on the rare occasions he was directly in the field he assumed the role of Rear Security. He was also in charge of chemical protection for the team and an expert with computers, specialising in information processing and hacking. But in contrast his combat skills were average and he was one of the lowest ranked S.T.A.R.S. members in terms of firearms and combat efficiency. Although he was without doubt a capable operative, Brad was cowardly under pressure and a worrier, resulting in trust issues with certain team members who felt unable to rely on him implicitly. Behind his back, he earned the nickname ‘Chickenheart.’ 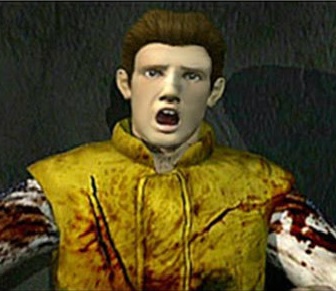 Brad was Alpha Team’s pilot during the mansion incident and was the only member of the team besides Barry who knew of the rocket launcher being on board the helicopter. During the initial Cerberus attack in the forest, Brad’s cowardly nature took over and he abandoned his colleagues and took off, leaving them to their gruesome fate. He spent the next few hours circling the estate trying to contact any survivors. Just as he was about to give up, he saw a signal flare being set off by the heliport and headed over and redeemed himself by dropping a rocket launcher for Chris Redfield to destroy the Tyrant 002. He then set down and rescued Chris, Jill, Rebecca and Barry seconds before the mansion exploded.

After returning to Raccoon City, Brad kept his distance from the other survivors who were pursuing Umbrella. He figured it was better not to take any unnecessary risks and had no desire to enter harm’s way. By the time Raccoon City became infected, Brad was officially the only S.T.A.R.S. member left on active duty, despite the unit being disbanded by Chief Irons sometime earlier, and was awaiting reassignment. But in the midst of the zombie infested town, Brad simply panicked. He briefly met up with Jill Valentine but all he could do was cry unintelligibly and made no offer of assistance. By this point he had lost all of the pride and discipline of being a S.T.A.R.S. member and all he could do was flee from his relentless pursuer; the Nemesis T-Type. But in the end, he ran out of places to hide and was caught and killed right outside the police station. In an ironic twist, he was infected by a strengthened form of the t-Virus secreted from the Nemesis’ tentacles and became a zombie despite his brain being destroyed. He wandered the streets outside the precinct house aimlessly looking for flesh. He was finally put out of his misery by Leon S. Kennedy, who shot him in the head.