Brian Irons was a sadistically evil man and something was not quite right in his head. Whilst little is known about his early years, he married at a young age and attended university. Whilst there he was arrested twice for incidents relating to domestic violence against his wife, but he avoided a criminal charge thanks largely to circumstantial evidence and his remarkable academic achievements. However, he was ordered to undergo psychiatric evaluation with a yearly review as part of his rehabilitation. Despite his lucky escape, Irons was less than grateful and did his best to avoid the sessions.

After graduating university, he ironically pursued a career in politics and law enforcement. In his spare time, he was a keen fisherman and developed a love for taxidermy and art. After a successful front-line policing career he eventually became Chief of Police for the R.P.D., but was never popular with the staff working under him. 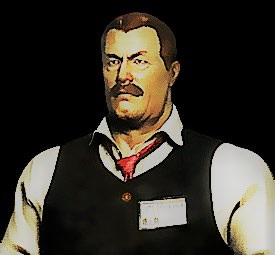 Irons used his influential position to buy favour with city politicians and enjoyed a close relationship with Mayor Michael Warren. Before he became Chief of Police, he was one of the mediators that helped acquire the old art museum as a base for the new Raccoon City Police Department precinct building.
While pretending to be a warm-hearted police chief, concerned first and foremost with the safety of the city, he was actually concerned only with lining his own pockets. In the early 1990’s Umbrella were looking to earn leverage with local authority in Raccoon City and Irons was an easy target thanks to his greed.

By 1993 Irons was in Umbrella’s pocket and he ensured the R.P.D. was at their calling. One of his first tasks in his new role was to cover up the incident at the old hospital in the Arklay Mountains after the police were called in to investigate following the mysterious disappearance of a local reporter. Umbrella had been conducting clinical trials on patients using an oncolytic variant of the t-Virus and things had gotten out of control. Irons derailed the police investigation long enough for Umbrella to cover its tracks and get rid of all the evidence.

Over time, his ‘favours’ for Umbrella made him a very rich man. He used the money he made from these bribes to purchase rare, expensive paintings and art pieces, decorating many areas of the R.P.D. building which in a previous life had served as the city’s art museum. To avert any suspicion, Irons told anyone interested in his collection that it was made up of expensive replicas and not the real thing. At some point, Irons became so influential within city politics he released an autobiography entitled ‘The Power of Justice.’

His primary Umbrella contact in Raccoon City was William Birkin and Irons had a secret door installed in the back of his office with an elevator leading down to old mining tunnels connected to the underground sewer network. This enabled Irons to attend regular meetings with Umbrella and spend enough time away from the R.P.D. without raising suspicion amongst his police colleagues.

Irons set up security all over the police station in order to preserve his secret. One trick involved hiding a red jewel hidden behind a painting entitled ‘A Sacrifice to Hell Fire’ which depicted a nude person being hanged. Irons put No Smoking signs all around the station to ensure no one discovered the solution to this puzzle. However, his countermeasures were not completely successful and in particular the notes left by his own secretary and those of the sewer workers clearly showed his scheming and eccentricities. His secretary, Carol Sinderman, was particularly disturbed by some of his paintings and her curious eye into Irons’ affairs earned her the wrath of his fractious temper on more than one occasion. His short temper was just another element of a dark side that Irons often struggled to keep under control when under pressure.

During an Umbrella operations meeting in 1997, several members raised concerns over Irons’ erratic behaviour and debated whether Umbrella could still afford to trust him. A year later Irons did his best to stall the R.P.D.’s investigation into the brutal murders in Raccoon Forest, keeping all local authority well away from ground zero at the Arklay Mansion until the S.T.A.R.S. teams were eventually assigned to the investigation. In the build-up to this, his secretary filed an official grievance regarding his conduct and his art collection. This was the culmination of an incident dating back to when she accidentally moved one of the stone statues on the second floor of the station. Although nothing came of the incident, it again put Umbrella on alert about whether they could still trust him. Irons later murdered his secretary after she accidentally discovered the secret room behind his office that led to a twisted torture chamber he used to carry out his sordid little fantasies. Somehow, he managed to keep this incident under wraps but the stress of the situation was clearly getting to him.
Irons’ situation eventually began to spin out of control following the mansion incident. When the S.T.A.R.S. survivors tried to launch an official investigation into Umbrella, he managed to stall them. He even succeeded in getting the unit disbanded, though he had William Birkin constantly on his back warning him keep a close eye on them still. Chris Redfield had begun to suspect that Irons was in Umbrella’s pocket and called on a friend in the F.B.I. to make some enquiries into the Chief’s murky past. His background check revealed the arrests during his college years and subsequent psychiatric evaluation. Irons would regularly attend meetings and pass through the sewer, but the weight of being Birkin’s puppet was clearly taking its toll and on one occasion Irons pulled his gun on the sewer manager and threatened to shoot him.

In the month leading up to the biological outbreak in Raccoon City, the terrorism threat level in the area had gone up and this prompted Irons to install a security measure in the station that involved the release of nerve gas. This was to be used as a last resort only. With Annette Birkin as his contact, he also obtained evidence that spies had breached Birkin’s labs and he recovered several reels of photographic evidence he took back to the R.P.D. Overwhelmed with stress and pressure, Irons took to assaulting several young, blonde women and one such story even made the press after screams were heard on South Campbell Street. But no suspect was ever named. He was also being secretly investigated by journalist Ben Bertolucci who had somehow obtained a series of receipts suggesting bribery links to Umbrella. Even a contingent of his own officers were collecting evidence against their chief, led by Marvin Brannagh. They had taken photographs of Irons’ book-keeping records, fax records, and of a curious file he had been keeping on Michael Warren’s daughter, Katherine.
When Irons discovered Raccoon City had been contaminated his sanity finally managed to get away from him. He locked himself away in his office, effectively leaving deputy-chief Raymond Douglas in charge, and when he was killed during Operation Mop-Up, the R.P.D. were left without any leadership. In order to protect himself against any possible betrayal from Umbrella, Irons had been secretly collecting damning evidence against the corporation he could use as leverage should they ever threaten him.

Eventually Irons emerged from his hideaway and shot and killed several of his own officers. He also took all the ammo from weapons storage and hid it throughout the precinct. He was charged with protecting the Mayor’s daughter but instead he killed her and planned to stuff and make a trophy of her. He had several encounters with Claire Redfield before he was finally killed by the G-Creature in the early hours of September 30th. A fitting demise for an ugly man.