Brown Anderson was a former B.S.A.A. operative working for a Special Operations Unit as part of the West Africa branch. He was part of a relief squad that assisted with operations in Kijuju during the Las Plagas outbreak of 2009. There he fought Majini and witnessed some horrific sights, including the deaths of his entire unit. Following the incident, Brown quit the B.S.A.A. and became a survival instructor, hiring himself out to various scientific and adventure groups.

In 2014 he was hired by the production team of reality TV show ‘Idol Survival’ as an expert to assist with the terrain and
adverse environmental conditions the team would face on Sonido de Tortuga Island. As he always did, Brown brought along a cache of weapons in case of an emergency. He was an approachable and friendly man and early on assisted in the search for Coco, one of the models who went missing prior to the beginning of filming. 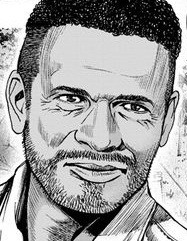 Brown reappeared later on when Emerald Beach was besieged with zombies as a biohazard took hold. There he helped Laura Bierce and Crazy Alexander escape back to the White Castle; a large ship privately hired out to the production team. On the ship Brown was able to recover his weapons and they held the zombies at bay as they swarmed all over the ship. However, during the attack Brown was injured and infected with the t-Virus variant developed by former Umbrella researcher Dirk Miller. He was knocked overboard whilst unconscious and his life was saved by Laura, who pulled him back to the island. Brown regained consciousness and was unaware he had been infected. He cheekily played dead when a worried Laura started to perform mouth to mouth CPR then slipped his tongue into her mouth. Laura was simultaneously shocked, repulsed and relieved by his gesture, though unfortunately for them both the transmission of saliva also caused Laura to become infected.

Once reunited with other survivors, Brown kept them all alive by setting up a camp laced with early warning signs, traps and trip wires to protect them all from the zombies. He was usually secretive about his former profession, but he opened up to Takeru Tominaga after he asked why Brown was so good at dealing with the undead. However, some hours later when he was on watch with Laura, Brown’s infection took hold and he began to regress into a zombie. In a struggle with Tominaga, Brown ended up shooting himself in the head.