Bruce McGivern was an operative of the U.S. Strategic Command Forces (STRATCOM) and assigned to the Anti-Umbrella Pursuit and Investigation Team; a division of the Secret Military Agency founded by Adam Benford shortly after the Raccoon City incident.

He had a strong sense of justice but was very reckless and cocksure, even disregarding his own life on occasion. He had a tendency to lose control but when it came to his job he was always reliable. Much of his background remains unclear but at some point he visited China and picked up a little of the language. 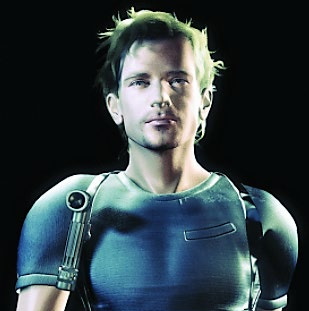 In 2002 he was called into action when terrorist and former Umbrella employee Morpheus D. Duvall hijacked the luxury cruiser, Spencer Rain, and threatened to launch t-Virus missiles at key targets in both the U.S. and China. Three days after Morpheus had first broken into Umbrella’s Paris lab facility and stolen three viral samples, Bruce infiltrated the ship.

But the mission didn’t go according to plan and he was apprehended by Morpheus almost immediately. Held at gunpoint and about to be executed, Bruce was suddenly saved Chinese Security agent Fong Ling who threw a grenade down from the top deck. The resulting explosion allowed Bruce to escape and wounded Morpheus badly.

Bruce began his search of the ship only to find all the passengers and crew were now zombies. He received a radio message from HQ informing him that Morpheus was holding the U.S.and China to ransom by demanding 5 billion dollars each to stop him launching missiles loaded with the t-Virus at both countries. Bruce later met up with Fong Ling and found himself attracted to her. Although he tried to forgea working relationship, she decided he would only slow her down and insisted on them working separately.

He eventually confronted Morpheus once again who by this time had injected himself with the t+G-Virus. He also later fought off Umbrella’s latest Tyrant model; the T-091,and barely escaped with his life as the Spencer Rain ran aground on an island containing Benthic Laboratories; Umbrella’s old waste disposal plant for failed B.O.W.s. This place was now Morpheus’ base of operations. Bruce found Fong Ling again and saved her after she became a target for assassination by her own government when a satellite laser platform was deployed to kill her.

Bruce encountered Morpheus again and incapacitated him through use of the charged particle rifle. This triggered the G-Virus inside him and he mutated into a mutant of gigantic proportions, eventually become so large he consumed the entire facility and triggered the missiles which destroyed him for good. Bruce and Fong Ling survived and whilst waiting for rescue in a life raft he attempted to persuade her to return to America with him. Fong Ling declined, though they did share a few romantic moments before they were picked up by the evacuation teams.

The current whereabouts and status of Bruce McGivern remains unknown.