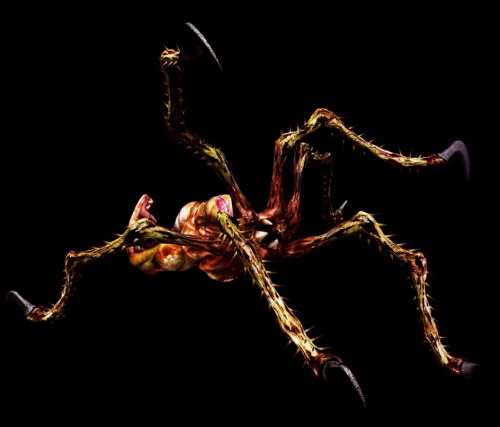 Bui Kichwa is a Plaga parasite grown within a human that is eventually able to discard its host completely and operate independently. A spider-like Plaga was documented in the South Europe incident that was able to leave its host, but it could only live for a short time before expiring. The Bui Kichwa has been given several improvements by Tricell scientists allowing it to survive a much longer life-span independent of its host. Like its predecessor, this species takes the form of a spider-like creature, with a pulsating abdomen that resembles a human organ.

They like to hibernate underground but will soon burrow up to the surface when they sense prey is near. They draw near to their target and then spring, clinging with their legs to ensnare. They always move in packs and are incredibly fast and agile. Their name comes from a combination of the Swahili ‘buibui’ which means ‘spider’ and ‘kichwa’ which means ‘head.’ They are able to burrow quickly through earth thanks to singular large talons on each of its six limbs. Its legs are full of spines and it has a large circular mouth with four razor-sharp teeth.

Bui Kichwa often attack in swarms and will lie in wait a few meters under the surface. It is not known how they sense their prey but movement and vibrations in the earth may be a factor. Practical use as a B.O.W. in on itself is limited as the Bui Kichwa rarely inflicts serious damage on a host, instead focusing on restricting their movements and leaving them vulnerable to attack from other sources. With this in mind, Bui Kichwa could prove more effective in the field when deployed alongside more combat effective B.O.W.s. In extremely rare cases, a fully formed Bui Kichwa will become entwined with a human host whilst trying to escape, sending the Majini body into frenzy and making them difficult to kill.