Carlos grew up as a resistance fighter with Native American blood in his veins. He was raised amidst violence and learned how to handle a gun at a very young age. From childhood, he committed himself to an anti-government Communist guerrilla organisation based in a certain South American country, and in order to determine his abilities, he spent far more years as a soldier than his youthful looks would suggest.

Carlos was a warm-hearted man who liked to joke around a lot. Because of his tough-upbringing as a child soldier he had the courage of a lion and was brave enough to throw himself into the heart of danger. He further honed his talents by becoming proficient with firearms from Eastern bloc countries and learned how to skilfully drive large vehicles and pilot helicopters and Cessna aircraft. 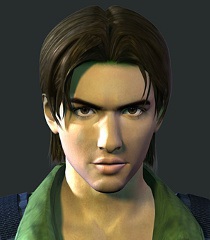 His guerrilla unit was eventually wiped out during a cleansing operation by military forces under the control of the local government and Carlos was the only survivor. He managed to flee but was arrested trying to escape over the mountains and cross the border. He was sentenced to death and spent time in solitary confinement to await his fate. But shortly afterwards a mercenary co-ordinator from Umbrella visited the compound looking for potential recruits. He evaluated Carlos’ tenacious survival skills and scouted him for the U.B.C.S. Carlos accepted this offer in order to revoke his death sentence and had his citizenship changed to leave his past life behind. Umbrella may have even paid for a plastic surgery procedure to alter his face.

Carlos became the youngest member of the U.B.C.S. at boot camp, and there he met Murphy Seeker and they became firm friends. He was assigned to Unit A of Delta Platoon under the command of Mikhail Victor and held the rank of Corporal. His duties included weapons maintenance, rear support, guard duty and supplies and equipment procurement.

On September 26th, 1998, Carlos and the rest of the U.B.C.S. were deployed to Raccoon City in the midst of the biohazard that had engulfed the entire town. After setting down, his platoon was charged with securing City Hall but were soon overwhelmed by the sheer number of zombies and the team was decimated, leaving Mikhail Victor, Nikolai Zinoviev and Carlos as the only survivors.

After getting the injured Mikhail to safety, Carlos sent out a distress call which was picked up by Jill Valentine who was investigating the R.P.D. at the time. A little later on they encountered each other at Grill 13 and he helped save her from the Nemesis T-Type before persuading her to join his quest to escape.
Eventually Carlos and Jill made it to the St. Michael Clock Tower to signal the evacuation helicopter when they were attacked by the Nemesis once again and Jill was infected. After getting her to safety, Carlos bravely went to the General Hospital alone to get hold of an experimental vaccine for the virus. Whilst there he encountered a surviving U.B.C.S. Supervisor named Tyrell Patrick and learned that Nikolai had betrayed them all. After getting the vaccine to Jill, Carlos went off on a private mission before meeting her again at the Dead Factory where he discovered the U.S. Government were about to launch a sterilisation operation and vaporise the town. He later intercepted a transmission from Barry Burton who had flown into the city to look for Jill and with just minutes to spare, sent up a flare to signal Barry down and the three of them escaped town just as the missile detonated behind them.

After the incident, Carlos stayed with Jill and Barry for a while before leaving on his own and ultimately deciding not to take up the fight against Umbrella. He later escaped the U.S. through Mexico and lived in either Chile or Columbia with unconfirmed reports he had further plastic surgery to change his appearance once again.