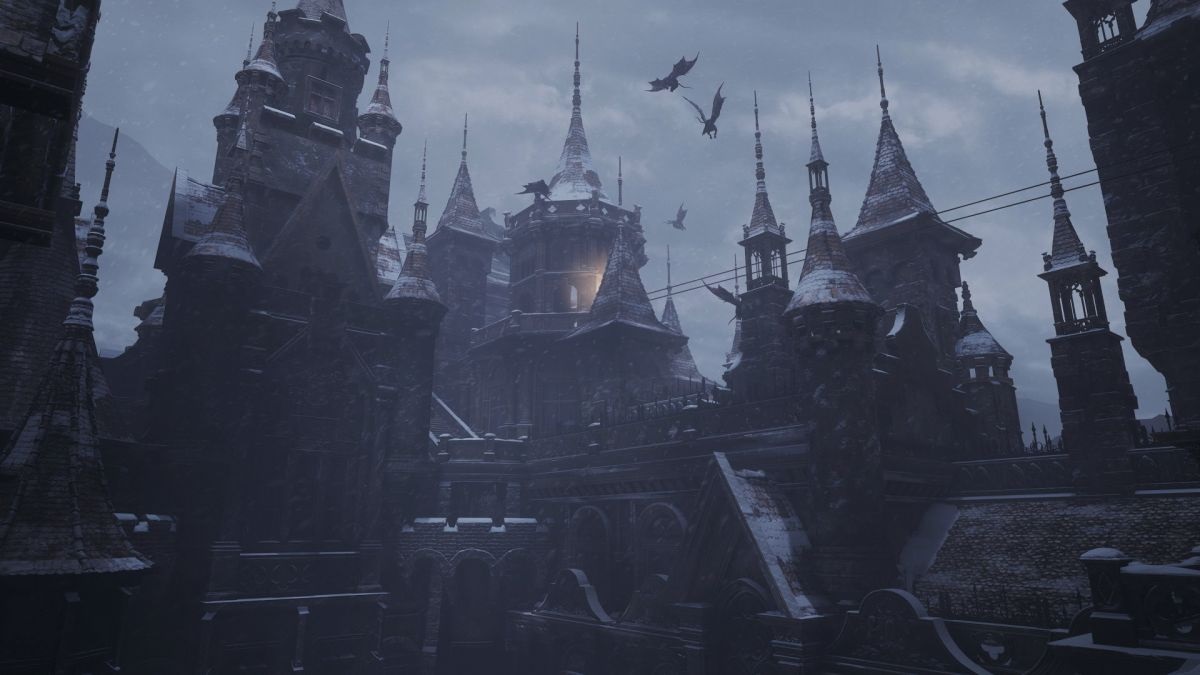 Castle Dimitrescu is a large, imposing structure located within The Village somewhere in Eastern Europe and was built in the 15th century. It is the ancestral home of House Dimitrescu and was reclaimed by its heir, Alcina following the administration of the Cadou parasite.

The Castle itself is extremely large, spanning multiple floors including a basement dungeon. Inside for the most part, the castle is decorated with furniture akin to a gothic or baroque vibe of the 17th century, only adding to the foreboding atmosphere of the structure.

By the middle of the 20th century following the discovery by Miranda of the Megamycete organism beneath the nearby Village, the castle was bestowed back to the Dimitrescu family through Alcina. Directly descended from the Dimitrescu clan, she was subjected to experimentation by Miranda with the Cadou parasite and Mold. Reacting favorably with a high brain affinity, Alcina was now an extremely tall but near immortal being. She took her place back in the Castle.

However, due to a hereditary blood disease that the Mold failed to eliminate, the new Alcina required a regular supply of blood to maintain her youthful appearance. This need was only increased when Alcina inadvertently created three “daughters” through experiments with the Mold and common houseflys. The three creations, dubbed Bela, Cassandra and Daniella themselves all craved blood.

Therefore after being given free reign by Miranda to conduct experiments on the Cadou to find a suitable vessel for her planned resurrection, Alcina’s tests saw subjects be drained of their blood. This blood was then stored in the lower levels of the Castle.

It can presumed that at some point in the 20th century, an additional need for Miranda and her experimentation arose – money, or the lack of. To ensure a regular supply of funds, the drained blood was then combined with grapes to create a locally produced wine called Sanguis Virginis. This was sold throughout Eastern Europe with the tradesman, The Duke presumably playing a role its sale and transport.

By the 21st century, many hundreds of locals had been employed at Castle Dimitrescu – with many not returning after being used by as test subjects. Despite the passage of time and the horror of the experiments going on inside, the Castle remained intact until February 2021 after Miranda had secured what she believed to the vessel to resurrect her daughter, Eva.

The vessel – Rosmary Winters was split into 4 parts with one being stored at the Castle by Alcina. In hot pursuit of his dauther, Ethan Winters arrived in The Village before beign capatured by Karl Heisenberg. Ethan however fled to the Castle where encounted Alcina and the daughters. Despite overwhelming odds, Ethan was able to escape the escape the clutches of the trio, killing them all before destroying Alcina in her mutated form. This final encounter left large parts of the external chapel and belfrey in ruins.

Hours later, with the growth of the Megamycete, large parts of The Village were consumed by the organism. However, the ritual, conducted by Miranda failed and the Megamycete along with The Village was annihilated. What was left of Castle Dimitrescu remains unknown.

Gardens: – The Castle entranceway is connected via drawbridge over a small pond known to contain fish. The pathway to the Castle is dotted with small vineyards that were used to help make the Sanguis Virginis wine.

Main Floors: – The first two levels of Castle Dimitrescu are extremely opulent – showcasing the baroque decor at its finest. The main hall has a singular staircase with a large dining room and kitchen situated off it. There is also a small office and selling quarters for The Duke. To the east lies the Opera Hall and to the north a small bedchamber and living room.

On the 2nd floor of the Main Hall there is a wine testing room and living quarters for guests. To the North is the Castle library and the balcony area for the Opera Hall. In the South West of the Castle is Alcina Dimitrescu’s private quarters and the Hall of Abulation – a special blood room that has secret access to the lower levels.

Lower Levels: – In stark contrast to the main levels, the lower levels of Castle Dimitrescu are scantly decorated. Used predominately for test subjects, the majority of the lower levels have been retrofitted for the purposes of Cadou experiments. Holding cells were in a key part of the dungeon areas where Morocaica’s were left to roam. Other areas included the distillery and wine making areas.

Attic and Roof area: – In the upper reaches of The Castle, there was access to the roof. Here the Samca B.O.W’s roamed roosting in the turrets.

The Chapel /Tower of Worship: – A small chapel annexed to the side of Castle Dimitrescu. An unnamed villager who attempted to assassinate Alcina lay in peace holding the poisoned “dagger of deaths flowers”.