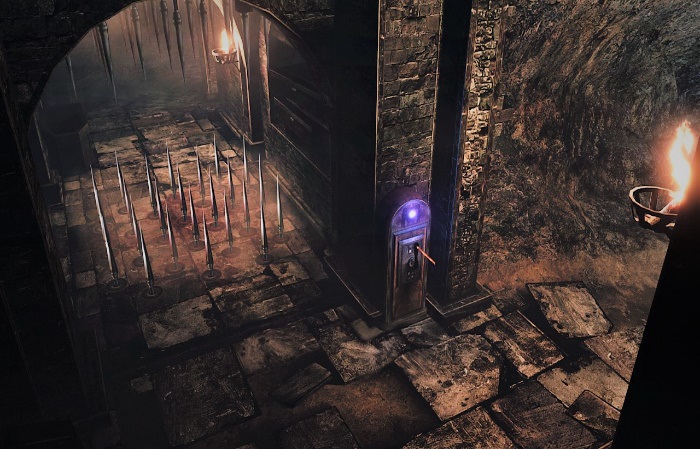 The Catacombs are a huge underground network of subterranean caves, structures and chambers dating back almost 400 years. Although nothing is known of the first people to inhabit this place, hints of their existence remain thanks to carefully constructed altars and giant stone carvings of ancient humanoid figures. In later years, The Catacombs were taken over by The Family; a secretive organisation who gradually developed enough power and influence to shape the course of human development over a long period of time. This location was used as the final resting place of the Simmons family and those who had faithfully served their mysterious organisation.

The numerous underground burial chambers are not known to the world at large, but the catacombs are still protected with many elaborate contraptions to keep outsiders from digging too deeply into The Family’s secret affairs. As time moved on and the lands above were reorganised into North and South America, a town was built above the ground around The Catacombs named Tall Oaks, and a cathedral constructed directly over the site entrance. This plot of land was purchased by the wealthy Simmons family and used as the main meeting point to the Catacombs and a place for The Family to conduct their secretive business. A hidden entrance was placed behind the main altar and four Madonna statues were required to open it. Charity, Sorrow, Grief and Happiness. They each had to be placed on a particular plinth on the first and second floors of the cathedral. “The two motherly saints will reveal the path.”

As well as housing numerous hidden passageways and booby traps to ward off potential interlopers, in the early 21st century the current Family head, Derek C. Simmons, had a portion of the upper levels refurbished into a modern scientific laboratory for the purposes of viral research. These levels include computer rooms, a prison holding area, experimentation chambers, and even a purpose built aquarium for marine-based experiments. A sewer channel and an old mine are adjacent to this area. The entrance to the main burial chambers is located beneath this laboratory and can only be accessed by using the Simmons insignia to set forth evidence of kith and kin.

Although a majority of the Catacombs are made up of structures and rooms carved from rock set over a deep abyss, primitive walkways are constructed across the caverns made from wood to make navigation easier. The main entrance to the burial chambers is symbolised by a circular room with numerous archways and pillars carved into ancient rock. Two flame-bearing torches are mounted on the walls either side of a set of heavy iron doors. Two people are required to gain access here with two levers either side of the entrance needing to be pulled simultaneously. This door leads into a large tunnel beyond with alcoves on either side spanning floor to ceiling filled with mummified bodies and human remains on display dressed in primitive clothing. Coffins and wooden burial caskets litter the floor and old ceremonial pots and vases are present near two iron reliefs of Lions’ faces sat staring at each other on opposite sides of an archway. Torches light up the way as the tunnel moves up some stairs and forks to the right. Hundreds of bodies are buried here. Portions of The Catacombs lay beneath a huge lake above ground and so underground springs and waterfalls are numerous. The tunnel encircles a large pit on the left disappearing even further underground. A huge waterfall splashes down onto the giant statue depicting a member of the ancient race who built this place. Near the end of this tunnel a human skeleton hangs upside down from the ceiling as a warning for unauthorised explorers to venture no further.

Following takeover by The Family, an elaborate trap was installed here with a pair of motorised spinning sickles emerging from either side of the tunnel ready to slice up intruders in an instant. Beyond here the tunnel zigzags to the right and left before another trap blocks the way via a pipe that spews fire from the mouth of a lion relief on the wall. This is activated via a crank from the other side of an underground river that flows beneath. There are more skeletons on show in this tunnel, each shown standing up in vertical alcoves in the walls and more old coffins, all of which are badly weathered with age. Another heavy door blocks the way here and a message carved; ‘Set forth evidence of kith and kin.’ You have to prove yourself to be a member of The Family in order to proceed. Each member of the Simmons family bore a ring with their family crest and placing the ring into the relief on the door granted access beyond. The door is on a timer and takes an age for the latches to release. This leads into a partially submerged chamber thanks to a waterfall coming down from a circular hole in the centre of the room. When Simmons installed the laboratory in the levels above; he also constructed an aquarium for water-based test subjects.

In the Tall Oaks incident of 2013, the experimental Brzak, originally a human test subject infected with the C-Virus that developed shark-like properties, was deliberately let out of this aquarium to prowl the underwater channels of the catacombs for intruders. There are more burial chambers in this room, although these are housed behind bars as if this place was once used as a prison. Ancient tree roots force their way through from the rocks above to get at this underground water supply. From here, the tunnel continues round into some natural caves where more coffins and caskets lay just above the water. Numerous stalactites hung down from the ceiling and strips of wood and sticks have been entrenched and bound together to form guideposts for the lost explorer.

The caves continue on until stairs lead up to the next tunnel. This next section is protected by numerous traps including spinning sickle blades and retractable spikes in the floor. The passage is flanked by an underground river and numerous gates and portcullises block the way and have to be retracted by an elaborate crank system that two people need to operate. For anyone who makes it through this section, one final trap remains by the exit door. Pulling the levers either side acts as a ruse for opening the entrance and instead activates a trap door, dropping those unfortunate enough to trigger it down into the very heart of the Catacombs. In 2013 Leon S. Kennedy described this place as ‘like being at the centre of the earth’ and it is comprised of a giant underground cavern with two huge statues of humanoid gods built into the solid rock. These were constructed by whatever primitive peoples had inhabited this place before The Family. They were clearly master craftsmen.

Numerous waterfalls rain down from holes and cracks in the rocks but the water cascading down looks frozen because it is so far away. The chasm is connected by a series of stone walkways leading down to an ancient temple with numerous archways and doorways constructed around a main entrance. The way down is a long one and more recent members of The Family made things easier by installing wooden bridges and walkways although many large gaps remain and one false move will send those not careful plummeting to their death.

Below this temple is a series of underground waterways connecting to the lake around Tall Oaks. In 2013 the temple was flooded after part of the structure collapsed and torrents of water came rushing through. It was possible to get back outside through this underground waterway. There are known to be numerous other unexplored sections of the Catacombs and due to its underground location, much of it is likely still intact following the sterilisation operation performed by the U.S. Government to resolve the biohazard incident at Tall Oaks. However, it will be extremely unstable and likely totally inaccessible following the damage caused, leaving many of The Family’s secrets buried forever.