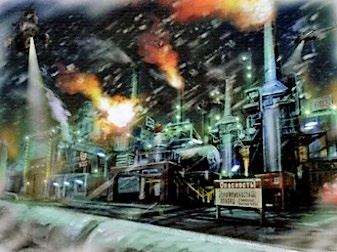 The origins of the Caucasus Laboratory trace back to 1908 on the day of the infamous Tunguska explosion in which a huge area of 2000 square kilometres had trees uprooted and windows shattered up to 1000 miles away. A huge mushroom cloud was witnessed in the sky and everything within a 30 mile radius was wiped out. The cause of the blast, thought to be a meteorite, was investigated by a Russian research team who came to the site in 1921. They remained on location for a number of years, studying strange phenomena in the area surrounding the site and discovering trace fragments of extremely rare metals. The group constructed research facilities in the blast zone which comprised of dozens of underground ventilation systems. In later years a chemical and manufacturing plant was constructed on the surface and remained in operation for a number of decades.

Following the end of the Cold War the facilities were closed down and the plant was left abandoned. After the fall of the Soviet Union it was taken over by Umbrella and operations were restarted and maintained as a front.

Following the Raccoon City incident of 1998, Oswell Spencer invested large amounts of foreign capital to begin construction of large-scale underground development, built in and around the subterranean ventilation system already in place from Soviet times. Geological surveys confirmed a solid bedrock perfect for construction of expansive underground facilities. The running of the base was placed under the supervision of Sergei Vladimir and as part of Umbrella’s behind-the-scenes revival program, the U.M.F.-013 mainframe and Red Queen AI were transferred to this location following their extraction from Raccoon City. Classified projects such as the T-A.L.O.S. were developed exclusively at this facility and for a number of years it remained a secret to all of Umbrella’s enemies. The plant became Umbrella’s main mass-production facility and was a vital part of the corporation’s underground activities. Hunters, Chimeras and Lickers were all cloned, trained and sold to various factions across the globe. The completed and perfect strain t-Virus was also kept here and secured deep underground.

Workers were sourced from nearby villages for labour purposes, but these men were also used as guinea pigs in biological weapons experiments. Sergei Vladimir struck a financial deal with the village priest to ensure the truth about these incidents were never publically revealed. On the outside, the factory has the appearance of an innocent looking oil refinery. However, the solid rock formations underneath the snow made for an ideal foundation for a network of tunnels and underground research areas. The interior ground level of the base was a colossal warehouse for storage of regular materials. A huge Umbrella symbol adjourned the floor which doubled as a hidden freight elevator that descended hundreds of feet underground to the restricted research areas. Locker rooms for employees were followed by a decontamination shower and numbered rooms in pristine chrome hallways contained all matter of Umbrella secrets. Restricted areas were guarded by a highly sophisticated laser-targeting security system and the lower levels contained numerous B.O.W. manufacturing plants and testing rooms. Other areas included artificially constructed waterways for Neptune sharks and other water-based creatures. There were training environments and also a large furnace for disposing of failed specimens. An elevator to even lower levels led to more storage areas, the main control room, an armoury, viral storage, the Red Queen’s chamber and the main B.O.W. testing arena where Chris Redfield and Jill Valentine would eventually battle the T-A.L.O.S.

Because the facility was so vast, an expansive subterranean mono-rail network was built using the underground ventilation system. The facility was surrounded on all sides by a thick blanket of snowy tundra. The inhospitable environment and hostile weather conditions kept people away from the area and the only nearby population centres were two isolated villages. The first, home to the Church of the Great Bones worshippers, became test subjects in the experiments. The second village housed one of the many secret Umbrella ‘hangars’ used to store classified research materials in hidden locations. The man in charge of the hangar was an Umbrella employee who kept schematics of the Caucasus’ base in a safe inside his home.

The Caucasus facility’s location was compromised in early 2003 following intelligence operations carried out by the rival company. This led to intentional information leaks by Albert Wesker that brought it to the attention of the Russian Government and Private Biohazard Containment teams. Following a successful incursion operation and a triggered Level 4 biohazard, the Caucasus facility was shut down indefinitely. The loss of this facility and all subsequent data was the key catalyst in finally shutting Umbrella down for good.