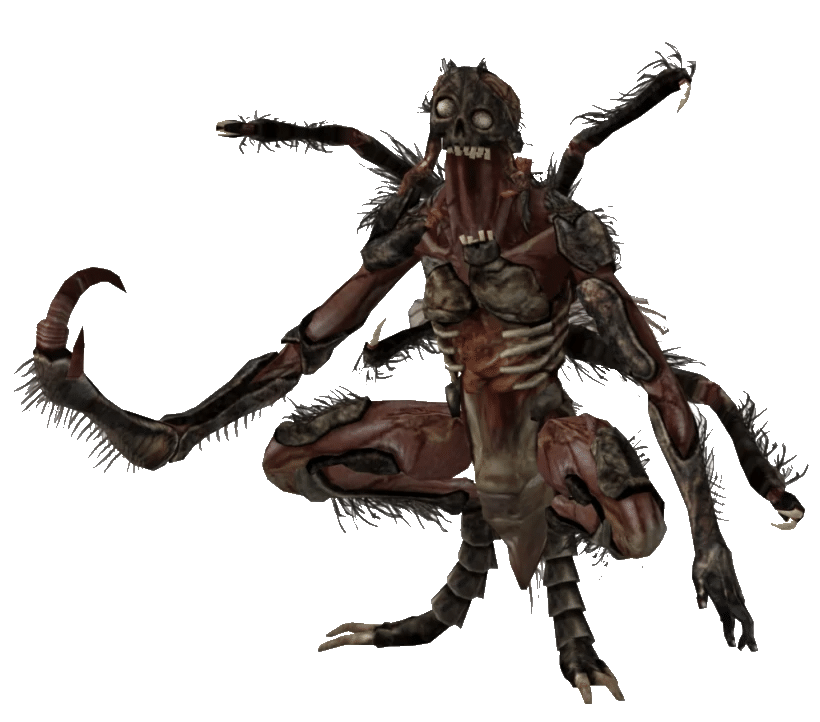 The Chimera was a B.O.W. created during the early phases of the second stage t-Virus project. It was a human-based experiment in which the genes of a fly were incorporated into an artificially inseminated human female and allowed to develop in the ovum. Both species were merged together thanks to the mutation properties of the t-Virus. This fusion was very successful and resulted in a perfect hybrid form reminiscent of the chimera from Greek mythology. Although the combination of differing species at gene level was naturally unstable, they were supported by the t-Virus which promoted abnormal evolution.

The growth cycle of a Chimera almost perfectly matched that of a fly and it reached maturity very quickly. As a result of the fusion between a human, which has an endoskeleton, and an insect which has an exoskeleton, the skeleton of the Chimera inherited the nature of both half-and-half and was complicatedly intricate. In adult form the creature resembled a human-sized fly and possessed many insectoid characteristics. It was able to hold onto walls and scuttle along ceilings thanks to its powerful limbs and sharp talons. It also possessed a warped skeleton thanks to abnormally sized muscles which resulted in a destructive power and agility that would even exceed the Hunter.

This resulted in extremely high combat ability evaluations. But because of its horrific appearance, there were recorded cases of researchers dealing with these creatures suffering severe psychological damage. Numerous maggots spilled out of its body cavity and it would circle human prey and emit a disconcerting shrilling noise that evoked confusion and fear. Its primary attack strategy was to stealthily crawl directly above its prey and attack from overhead, clawing at the neck with sharp claws or actually lifting the target up into the air. Whilst under observation, researchers noted that Chimeras would lie in wait for its prey and nest in narrow places, such as air ducts.

The Chimera was extremely aggressive but unfortunately and not unexpectedly, only possessed the intelligence levels of a fly, thus limiting its attack patterns and making it predictable over time. Its aggressiveness and control characteristics also fell behind the Hunter prototype which was developed simultaneously. Like many similar experimental subjects of the time, because of its low intelligence its practical use as a B.O.W. was shelved and it wasn’t given a development code number although its development data was retained on file.

In later years, more specimens were produced when Umbrella developed the technology to clone their B.O.W.s. An interesting side-effect of repeated Chimera cloning was that the specimens gradually lost the ability to jump long distances and hold onto ceilings. But to compensate their running speed along the ground increased dramatically. A small batch of living specimens were kept at Arklay Labs in 1998 and the development data on U.M.F.-013 led to them being cultured at the Caucasus Lab in Russia where they were available for sale on the black market.