Cindy Lennox was a waitress at J’s Bar in Raccoon City and was a popular person because of her unbreakable bright smile. Whether it was her cheerful nature or just the environment around her, she was always full of optimism, almost never cursed and always thought of other people over herself. Even when faced with a severe situation, she unexpectedly gathered hidden courage and adapted to the realities of a cruel society. Cindy was the most popular waitress at the bar and her colleague, Will, would often write in his diary about her beautiful smile. There was a picture in the locker room of Will, the bar’s owner Jack, and Cindy all standing together depicting happy times.

In secret, Jack was actually corrupt and was into the money laundering business. Cindy accidentally found out about this and came across a hidden stash of money but ultimately decided to say nothing about it. She also found the bar ownership papers just left carelessly lying around but did not dare to touch them. Though Will had a bit of a crush on her, Cindy was more interested in his cooking and often read a book of Will’s treasured secret recipes. 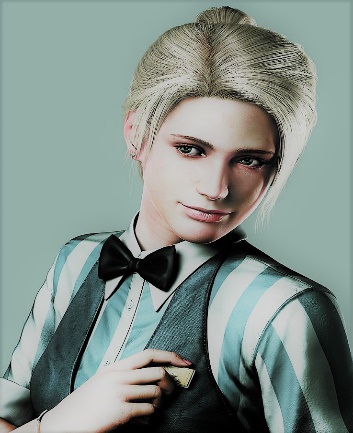 She was also into clothes and owned a full bunny girl outfit. She had a fondness for the city’s mascot; Mr. Raccoon and had a good knowledge of first aid and the application of herbs.

Cindy was working in J’s bar the night the Raccoon outbreak spiralled out of control. She was frightened by a rat scurrying across the floor and dropped a
glass. When the zombies poured into the bar, she had to watch in horror as Will was eaten alive. She helped a small group of survivors escape by leading them up to the roof and across to the old apartment block next door. She was then picked up by the R.P.D. and evacuated from the area.

Later, she made her way through the Raccoon Zoo in a bid to meet one of the designated rescue helicopters set up by deputy police chief Raymond Douglas.
Although she had narrow scrapes with ‘Oscar’ the zombified elephant, she managed to escape. But thee rescue helicopter had crashed and the zombies were
feasting on the corpses of the dead inside. During her plight in Raccoon, Cindy got on extremely well with Dr. George Hamilton and the two became close. Following her narrow escape from the city, she drew a line under the whole thing by moving away from the area and buying a new house.