Clive O’Brian was the first operational director of the Bioterrorism Security Assessment Alliance (B.S.A.A.) and it is speculated he was an Original 11 founding member alongside Chris Redfield, Jill Valentine, a U.S. Government employee with close ties to Sheva Alomar, and eight Others. The B.S.A.A. was an NGO set up under the guidance of the Global Pharmaceutical Consortium as a counter bio-terrorism group and O’Brian personally recruited all members.

At first glance, O’Brian is quite a scruffy-looking man but this unkempt appearance on the outside disguised a canny and intelligent mind skilled in politics and business matters. He had strong leadership skills and his knowledge and expertise on bioterrorism is second to none. He recruited all B.S.A.A. members personally and was effective
at shaping a skilled team of agents out of an initial, disorganised and somewhat ruffian group. 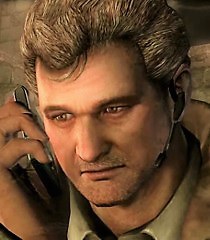 Despite his role as director, O’Brian did not relish being in the limelight and preferred to work from behind the scenes, leaving his field agents the freedom they needed to carry out their work. His philosophy was based off a chapter of Matthew in the bible which quoted ‘Let not your left hand know what your right hand does.’ However, if there were an emergency situation he would automatically take charge and co-ordinate from headquarters, giving precise instruction to his field agents at all times through radio contact. This was when his natural leadership skills came into play. When in this role he would use the radio call sign; Fork Ball.

In 2004, during the Terragrigia Panic, the B.S.A.A. were sent in as observers to assist the F.B.C. in their handling of the incident. The F.B.C. did not want external help but the European Community campaigned due to their vested interest in the city of Terragrigia and so O’Brian was sent into the hot zone as an observer and advisor to the rescue effort. He worked closely with the F.B.C. Commissioner Morgan Lansdale, though the power-hungry Lansdale often dismissed O’Brian’s advice. Although it was obvious Lansdale at least respected O’Brian and held him in high regard, but he would not allow him to step on his toes. O’Brian rejected strongly to Lansdale’s desire to destroy the biohazard and the city by using the Regia Solis satellite to vaporise the whole area. He believed they would lose crucial evidence that would impede their investigation into exactly what happened and the virus the terrorists used. But Morgan waved away his protests. Because O’Brian was working with practically no support staff there was nothing he could do to stop him. O’Brian evacuated his staff and chose to stay behind on his own for one last-ditch attempt to chance Morgan’s mind, even though the tower building they were in had been compromised by the Hunters the Veltro terrorists had released. He reached the control room and chastised Morgan in front of his own surviving agents, claiming that destroying the city would only martyr and create a new Veltro, perhaps a dozen of them. But still the Commissioner would not see reason and in the end O’Brian was forced to evacuate via helicopter and was powerless to watch the Mega Float City burn under its own artificial power source.

In the aftermath of the incident, O’Brian watched with interest as the F.B.C. came under harsh criticism for their handling of the incident and suspected Lansdale was hiding something. He quickly came to believe the decision to destroy Terragrigia was done not just to end the incident, but to get rid of something Lansdale wanted no one else to find. Several disillusioned F.B.C. members transferred over to the B.S.A.A. including Parker Luciani and Jessica Sherawat. But Jessica was secretly a mole sent by Lansdale to act as his spy within O’Brian’s organisation.

In 2005, he was approached by Raymond Vester, an F.B.C. agent who survived the Terragrigia Panic and someone with similar misgivings about Lansdale. They both agreed he was hiding something behind the incident and so the two of them decided to stage a fake revival of Veltro to see how Morgan would react. They used a desolate airport in the Finnish mountains in Europe and appealed for Veltro believers to join their cause. O’Brian created a new Veltro manifesto to recruit members under the moniker Earl Brinvico –an anagram of his own name. Vester then posed as their new leader and this information was ‘leaked’ to the B.S.A.A. This was a dangerous game to play and only Vester and O’Brian knew the truth. O’Brian couldn’t even trust any of his agents, including Chris or Jill with this information as he suspected there was a mole somewhere inside the B.S.A.A. To firm up the Veltro rumour, O’Brian sent Chris Redfield and Jessica Sherawat up into the mountains to investigate the airport, and neither had any reason to believe it was anything but genuine at the time. By this point, the base was populated by sympathisers, copycats and former members.

When several unidentified corpses washed up on a beach near the remains of Terragrigia, O’Brian joined Jill and Parker to conduct an investigation. He was a little out of shape and his doctor had advised him to get out and get more exercise. He often alluded to being jealous of his younger subordinates and admitted he missed field work. During the beach investigation they found traces of the t-Abyss Virus and O’Brian took a call from Vester, disguising it as an emergency message and receiving confirmation he was in position on the Queen Zenobia and everything was set.

The mission began and O’Brian dispatched Jill and Parker to the Queen Zenobia knowing that Vester would play out the Veltro role and contact with them would soon be lost. He would then recall Chris and Jessica to look for them. However it was apparent almost immediately that O’Brian was very uncomfortable in the role of chess master. He knew he was unwittingly putting his agents in harm’s way without giving them the necessary information to survive. Things started off well-enough with Morgan panicking and attacking the fake base at Valkoinnen Mokki airport with a plane-load of B.O.W.s. He lost contact with Jill and Parker on the ship as planned but they were out of contact for too long and he began to get seriously worried. He sent agents Keith Lumley and Quint Cetcham to Valkoinnen Mokki to look for evidence into the F.B.C. operation and to hack into their database hoping to find something that would expose Lansdale.

However, O’Brian’s carefully orchestrated plan began to unravel when Lansdale relocated the Queen Zenobia before he did and tried to use the Regia Solis to destroy it. It was only thanks to Quint’s advice to use the UAV to disrupt the satellite’s targeting system that kept Parker and Jill alive and the evidence against Lansdale on the ship intact. The F.B.C. also attacked Valkoinnen Mokki airport again, firebombing the whole place after they received confirmation their secure server had been hacked into. Believing Quint and Keith to be dead, and Jill and Parker now in mortal danger, O’Brian reflected on the ridiculousness of his plan and the disaster it had turned into.

The Zenobia eventually sunk and Jessica was revealed to be working for Morgan. Chris managed to rescue Jill but Parker was believed to be dead. They had found circumstantial evidence to show that Lansdale had orchestrated the Terragrigia Panic but had nothing solid to prove it. However, just before he lost contact with Quint and Keith, they had managed to send over the co-ordinates for the Queen Dido, a third ship no one at the B.S.A.A. had previously known about which now rested at the bottom of the Mediterranean having been sunk during the Panic. O’Brian sent the co-ordinates to Chris and Jill.
Shortly afterwards, O’Brian was arrested by Lansdale and the F.B.C. for conspiring with the terrorist group, Veltro. However, this wrong was eventually corrected when Jill and Chris obtained video evidence of Lansdale’s dealings with Jack Norman and Veltro. O’Brian was freed and Lansdale arrested in his place.
Although his plan had been successful in the end, O’Brian could not live with the guilt of using his best agents as pawns in his game to bring the F.B.C. commissioner down and so resigned his position as B.S.A.A. director so he could take responsibility for his dangerous plan.

He retired to his home where he spent his free time writing a detective novel. He also remained an advisor to the B.S.A.A. In the years that followed, O’Brian eventually released his novel under the title ‘The Unveiled Abyss.’