Curtis Miller was born in the town of Harvardville in the mid-western U.S.A. He grew up there and trained as a doctor before taking a job in Raccoon City. He later relocated, taking his wife and child with him and they lived a happy, serene life. They would frequently be visited by his police officer sister, Angela, and would often return to Harvardville with Curtis retaining the original family home in the suburbs.

He was out of town when the biohazard consumed Raccoon City in September 1998 and was forced to watch the terror unfold from the army barricades on the edge of the quarantine zone. His sister Angela was there with him and they stood helpless as the U.S. Government carried out the sterilisation operation that vaporised the town. Consumed by anger and grief, Curtis dedicated his life to finding out the truth behind the incident, believing that exposing those involved was the only way he could get justice for his family. At some point afterwards he joined the NGO TerraSave. 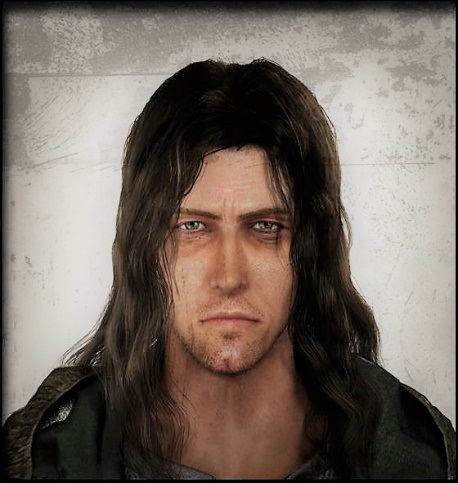 In 2002, when pharmaceutical company WilPharma was granted access to move to Harvardville and construct a state of the art research facility, Curtis violently opposed the decision. TerraSave distanced themselves from his actions as he used aggressive and unorthodox methods to pressure WilPharma into releasing details on their clinical trials conducted in India to the public. He was eventually arrested for obstruction of business and attempted blackmail. He was also expelled from TerraSave and a spokeswoman had to issue a statement confirming their disassociation with him. Curtis fell into a downward spiral once more, becoming a recluse rarely seen in public. He also broke off all contact with Angela, who by now worked for the Harvardville Special Response Team.

In 2005 when the WilPharma facility was completed, Curtis came into contact with their head researcher, Frederic Downing, who was secretly a black market broker wanting to sell the t and G Viruses to terrorism supporter, General Grande, leader of the Republic of Bajirib. Downing was looking for a test subject he could inject the G-Virus in to showcase the results for the General. Noting Curtis’ fragile mental state and desperation, Downing manipulated Curtis into helping him stage a bioterrorism attack that would get the world’s attention. He told Curtis the truth behind the Raccoon City incident and together they came up with a plan to force the President of the United States to reveal that same truth publicly by scattering the t-Virus across Harvardville Airport with the threat of major cities to follow afterwards. However, this last part was to be just a bluff and Curtis only agreed on the assurance that the airport outbreak would be contained and not lead to a repeat of the Raccoon incident in his home town.

After successfully infecting the airport, Curtis returned to his home one last time to say goodbye to his family and all their happy memories before burning the place to the ground. Having been given architectural plans and access to the WilPharma building in advance through Downing, Curtis went to the facility and recovered the G-Virus sample. However, he was injured in a staged explosion orchestrated by Downing and forced to inject the G-Virus into himself. This was his final, last ditch attempt to show the world what horrors the U.S. Government and Umbrella were responsible for and he underwent several mutations as U.S. Army Rangers tried to take him down. His own sister Angela was called in to stop him, and the G-Curtis had to constantly fight the feelings of wanting to both protect her from harm and inject her with a G-embryo. But after a long, drawn-out battle, Curtis was eventually destroyed by both Leon Kennedy and Angela.

Despite his terrorist actions, it was widely recognised by all investigating parties that he had been manipulated all along by Frederic Downing and that he was not an evil man. His life, like so many others before him, had simply been destroyed with the destruction of Raccoon City seven years ago and the survivors all shared in Curtis’ passion to see those responsible brought to justice.