D.C. was a veteran of U.S. Special Forces and an accomplished pilot of multiple military aircraft. He eventually joined the B.S.A.A. to take up the fight against bioterrorism and his decorated background allowed him to take command of ‘Silver Dagger’; an elite unit within the B.S.A.A. with special privileges and access to advanced equipment. Also on D.C.’s team was Damien, his friend and colleague from the military, and former L.A.P.D. SWAT team member Nadia. D.C. had a calm, composed and relaxed personality. He greeted new members warmly and always invited discussion and recommendation from his subordinates. One of his talents was hacking electronic devices to extract information.

Outside of work D.C. had a passion for Breaking Bad and would often be drawn into conversations and arguments about the show with Damien. He also liked to read a book, often taking a moment between missions to take some time out and refocus. He was also divorced and rarely saw his children. The last time he saw them was on a trip to the National History Museum in New York.

In 2014 Silver Dagger were assigned to track down wanted arms-dealer and bioterrorist Glenn Arias and were joined for the duration of their operation by Chris Redfield to which D.C. turned over his command without argument or protest. 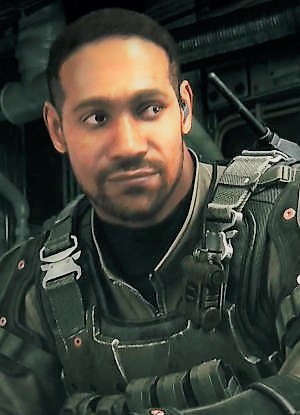 He partook in the mission to extract Rebecca Chambers after her university in Chicago had been deliberately attacked with a deadly new bio-weapon called the A-Virus. They then flew to Colorado to speak with Leon S. Kennedy and Rebecca found herself amused that D.C. was able to switch off from the task at hand so easily and become fully absorbed in his books. D.C. explained that Francis Bacon once said knowledge is power, a notion he had absolute belief in.

It may only take one bullet to bring an enemy down, but with knowledge you could defeat all evil. This philosophy helped keep his perspective in life. D.C. later piloted the Osprey during the B.S.A.A.’s response to the A-Virus engulfing New York. He used the craft’s cannons to destroy tanker trucks dispersing the deadly second stage trigger virus on the unsuspecting populace which transformed them all into flesh-eating zombies. He also assisted in the final battle against a mutated Diego Gomez and only his superior piloting skills were able to keep himself and Nadia alive. D.C. later flew the Osprey across New York and dispersed the airborne vaccine down across all areas of the city, transforming any recently infected people back to normal and saving thousands of lives in the process.