Damian was a soldier in the Bioterrorism Security Assessment Alliance. Little is known about his background other than he was originally in the U.S. Special Forces where he received a majority of his military training. It was during his time here that he also became acquainted with D.C. and they became good friends. He prided himself on physical fitness and worked hard to gain an athletic body. He was friendly and approachable and could easily be distinguished thanks to his distinctive Mohican haircut.

Damian viewed himself as a natural born hunter and could not imagine life without battle. However in contrast to his physical build, Damian could be quite sensitive underneath and sarcastic. He was also a little reckless and put himself in dangerous situations without taking the time to risk assess his actions first. 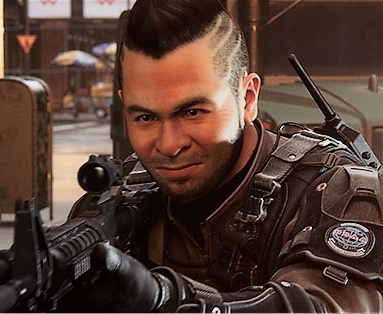 Outside of work, Damian had a passion for the Breaking Bad TV series and would often be found in serious debate with D.C. about the show.

In 2014, Damian was part of the elite B.S.A.A. Silver Dagger unit who were assigned to track down Glenn Arias. He used his marksmanship skills to clear out many zombies lurking within the Alexander Institute of Research and Bacteriology during the team’s rescue of Rebecca Chambers. He was also an accomplished pilot and able to take control of the Osprey the Silver Dagger had specially assigned to them. Although he was pleased to have Rebecca working with him, Damian harboured reservations the A-Virus may never have a proper cure. When the virus was later unleashed upon New York, Damian worked alongside Chris Redfield on the ground as they set about destroying marked AGUA-A tanker trucks that were dispersing the second stage trigger virus onto the unsuspecting populace. Damian shot and killed an armed mercenary protecting the tanker but his curiosity managed to get the better of him when he accidentally unleashed two deadly Cerberus B.O.W.s from the back of an unmarked van. These dogs had been further enhanced by the A-Virus and Damian was immediately set upon and killed instantly.