Dan DeChant began his military career by enlisting in the United States Army at a young age. There he rose up the ranks becoming an excellent non-commissioned officer. After taking early retirement, he enlisted in a private military company whose activities focused predominantly on Africa. Whilst there, he witnessed the full atrocity of black market B.O.W.s used by terrorists and this influenced his decision to later join the B.S.A.A.

Despite his American roots, DeChant decided to remain in Africa and enlisted with the West African branch. He became a member of the Special Operations Unit (S.O.U.) and was one of the few operatives to enter the highest senior class. He eventually rose to the rank of Alpha Team Captain. 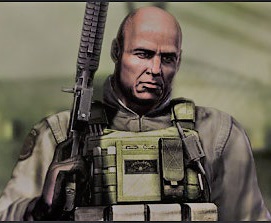 DeChant took part in a number of successful operations and by 2009 was 53 years of age and had an almost unmatched level of field experience. He was also nearing the end of an illustrious career on the front line.

For the Kijuju mission, DeChant led the B.S.A.A. Alpha Team into autonomous zone and secured the warehouse believed to be the location for Ricardo Irving’s weapons deal. There DeChant downloaded extensive data from Irving’s computer relating to new biological weapons experiments. However, Alpha were lured into a trap and ambushed by the Uroboros creature created by the Plague Doctor. Alpha Team were massacred by the Uroboros creature and although he was mortally wounded, DeChant managed to survive through the pain long enough to ensure all the data they had collected was safely passed onto Chris Redfield of Bravo Team. He insisted Chris get the data to HQ before shortly succumbing to his injuries.