David King was a quiet, mysterious man who worked as a plumber in Raccoon City. He was very practical, skilled at fixing things and always carried a tool belt around with him. He was also gifted with a blade and very fond of knives. He was not unfriendly, just a man of few words and was easily misinterpreted, giving off an unapproachable air. His past was shrouded in mystery and he never discussed it with anyone, though it is believed he was of Native American descent. His exact age has never been confirmed and there was evidence he had a criminal past and associated with many dangerous people, learning something from each of them. He also didn’t like looking at chains as it reminded him of the handcuffs he wore as a delinquent kid. 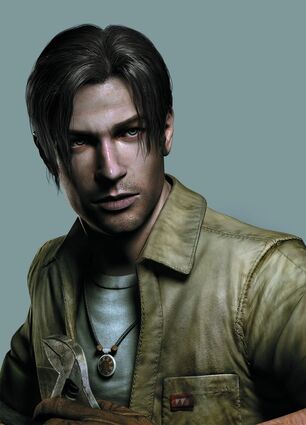 He was a man of few words and likened himself to a lone wolf, believing himself to be dominant, fierce, resilient and adaptive to the situation at hand. He wore a ring with a raging lion’s face, believing it could really do some damage to an opponent’s face in a fist fight. He also had a knife with a lion carved on the handle and a bracelet with sharp points designed to look like a lion’s claws.

During the 1998 Raccoon city incident, David was enjoying a quiet drink in J’s Bar when things quickly got out of control. He made a run for it and teamed up with a few other survivors, managing to stay alive through various locations across the city over the course of seven days. He got along well with Alyssa Ashcroft and Mark Wilkins but took a dislike to Police Officer Kevin Ryman because of his occupation and waitress Cindy Lennox. He and Kevin tended to avoid each other.

By October 1st, David found himself sheltering in Umbrella’s corporate headquarters, saving a researcher named Carter by battering a zombie to death with an iron bar. Another researcher named Linda Baldwin had an evacuation plan and David worked with her in order to secure his escape route out of Raccoon City. Following the incident, David was seen making some arrangements before leaving on a ship bound for pastures new. He was never heard from again.