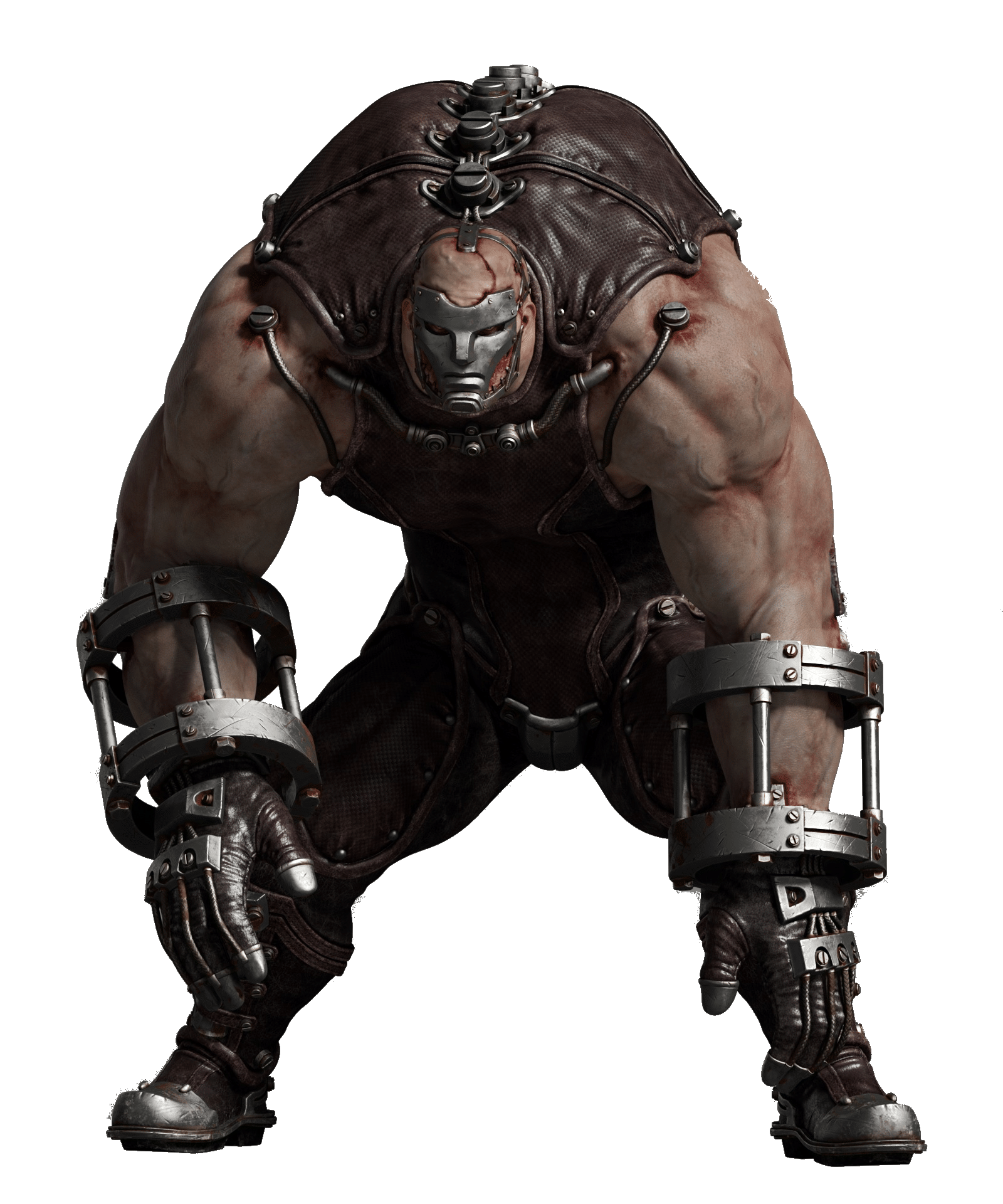 This biological monster was created after Diego Gomez was mortally wounded in the explosion and the only way for his friend Glenn Arias to preserve his life was to transform him into a tyrant-type biological weapon. He underwent body strengthening surgery and was given numerous doses of growth hormone which increased his muscular structure and made him abnormally large. Presumably he was dosed with the t-Virus and then equipped with an exterior power limiter to keep runaway mutation in check. Later when the A-Virus was perfected, he was further strengthened and was a unique Tyrant created with an A-Virus and refined t-Virus combination. The transformation was a success, though Diego was left mute and unable to speak.

The application of the A-Virus left him devoid of all emotion and he was made to wear a special chrome mask to hide the disfigurement on his face. In addition he had metallic support struts on each of his arms. The Power Limiter was directly grafted onto his spinal column with metal rods and bolts hammered directly into the flesh. Whenever Diego rested, he had to sit inside a special machine to allow his limiter to charge. In this form Diego still acted as bodyguard to Arias and he was programmed to deactivate his power limiter and mutate should Arias be mortally wounded.

Due to the influence of Plaga nucleotides in the DNA sequence of the A-Virus, Arias could combine himself with another life form in a similar manner to how the Mother Plaga absorbed Ramon Salazar. In his regular form, Diego possessed unmatched strength and was able to wield custom-made weaponry far too heavy for a normal human being to carry. He was an enforcer for Arias often working alongside Maria and teams of armed mercenaries. Because he carried the a-Virus, he was immune to attack from other infectants. He retained his intelligence but was still unable to speak, only showing small traces of his former humanity whenever Maria was close to him.

Diego was present when the Mexican GAFE launched a failed bid to apprehend Arias at one of his mansions in Mexico. He later reappeared in Colorado and assisted in the murder of Los Illuminados betrayer Patricio and the capture of Rebecca Chambers. In New York he was badly injured in a battle with Chris Redfield when he was engulfed in the aftermath of an incendiary grenade explosion. When Arias was mortally wounded after falling from a rooftop, Diego,as ordered, disabled his power limiter and began a transformation. Plaga-like proboscis sprouted from his back and assimilated the dying form of Arias into his own being. Typically for a Super Tyrant, the outer layer of skin hardened and became armoured almost like the skin of a tough reptile.

It was Arias who was now in control of the body with the remains of Diego’s head now grafted onto the shoulder. Whatever was left of Diego was finally destroyed when Arias was shot by B.S.A.A. member Nadia firing a railgun.