Diego Gomez was a close friend and business associate of Glenn Arias. He was a large, muscular man with an imposing build and served as bodyguard to Arias. There is no record of his wife but he had one daughter named Maria. Gomez originally worked as a top executive inside a formidable Mexican drug cartel. It was there he met and befriended Arias, who at the time was infiltrating the organisation on behalf of the CIA. Diego ran into some trouble with the leaders and Arias helped him out, resulting in the start of a strong friendship.

Diego always wore body armour under his clothes on any occasion and was one of a small exclusive group who knew of Arias’ real identity after he had left the CIA and gone dark. 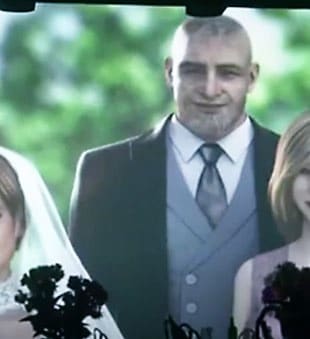 Both Diego and Maria were in attendance at Arias’ wedding when it was targeted in a smart bomb attack by the U.S. Government. The blast killed a majority of those present, but Arias survived thanks to Diego protecting him, though this led to a certain amount of bitterness from Arias who believed Diego should have instead protected his bride, Sarah. Diego was mortally wounded in the explosion and the only way for Arias to preserve his life was to transform him into a tyrant-type biological weapon. He underwent body strengthening surgery and was given numerous doses of growth hormone which increased his muscular structure and made him abnormally large. Presumably he was dosed with the t-Virus and then equipped with an exterior power limiter to keep runaway mutation in check. Later when the A-Virus wasperfected, he was further strengthened and was a unique Tyrant created with an A-Virus and refined t-Virus combination. See B.O.W profile here.