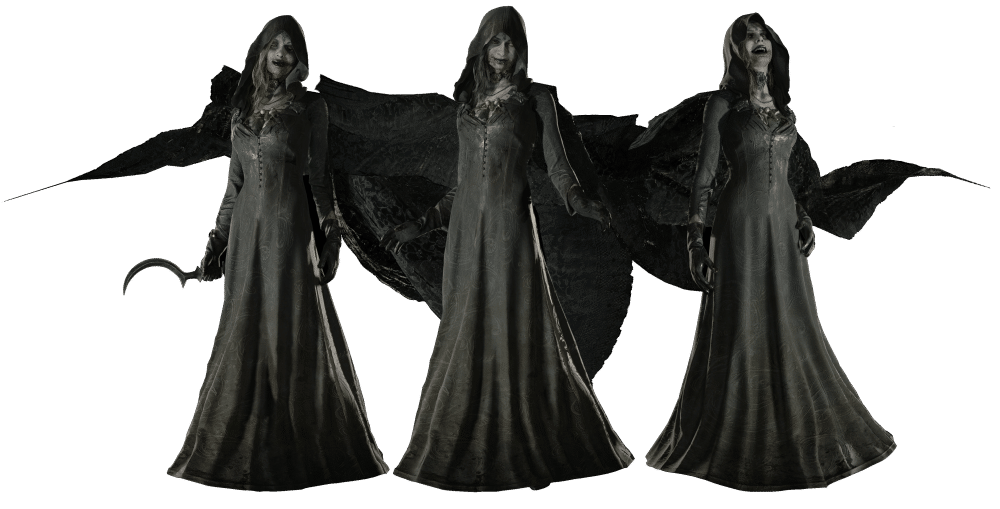 The origins of the daughters is unclear, but it can be assumed they were planned experiments undertaken by Alcina in a similar vain to that of other handmaidens. However, during the administration of the Cadou parasite, unique reactions were observed.

After the first day of treatment a common fly was noted as escaping from  the daughter’s mouths. By the second day, all three bodies were covered in these flies consuming the flesh and human DNA of the girls. Its takes just 24 hours for the flies to devour the bodies leaving only a bodily shell completly made up of hundreds of insects. It is then noted that by the sixth day the insects have fused together and in-effect re-birthing the daughters as insect hybrids. These new B.O.Ws are capable of acting in unison and transforming into thousands of flies at any given second. This is a very similar hive like creation first seen with the Mimicry Marcus B.O.W.

It is unknown as to how this mutation occurred, but it can be assumed that the Mold infected a housefly during the initial experimentation process resulting in this fusion of insect and human. The fly now saw the bodies of the daughters as their home and mother and multiplied, feeding off their flesh in the process.

The result saw Bela, Cassandra and Daniela be near invulnerable to attacks or firearms, but they were extremely vulnerable to the cold. Exposure to low temperatures would see the insects that make up the B.O.W freeze causing them to slow down. During this period, the girls would be vulnerable to attack as the insects would be unable to avoid collision. Excessive exposure would lead to permanent freezing and ultimately death.

All three daughter’s had an insatiable lust for blood – a by product of their fly chemistry, but also their affinity with the Cadou parasite. With Alcina Dimitrescu also requiring fresh, regular blood, the four would hire and then use maiden’s for their experiments whilst also using drained blood to keep them fulfilled.

All three of the Dimitrescu daughter’s were killed by Ethan Winters in February 2021. One all occasions, he was able to expose the B.O.W to the cold harsh elements of the Eastern European weather and then unleash heavy firepower to end their lives once and for all.