Dirk Miller was a German scientist and a former researcher of the Umbrella Corporation. His time at the company and the projects he worked on remain a mystery yet he remained loyal to Umbrella following their dissolution in 2004. A year later he was selected by Oswell Spencer alongside a comprehensive research team to assist Alex Wesker with an ambitious plan to create a virus capable of granting the user immortality. The site for this project was a former Umbrella facility located beneath an abandoned U.S. Military base on Sonido de Tortuga Island. Wesker and Miller set to work by using the thousands of test subjects provided by Spencer to create the perfect virus. They based their experiments on the template of an ancient Chinese curse by which subjects were placed into a confined environment and made to fight to the death until only the strongest subject survived. This was known as the ‘Kodoku Plan’ and also took inspiration from Charles Darwin’s ‘Survival of the Fittest’ theory. 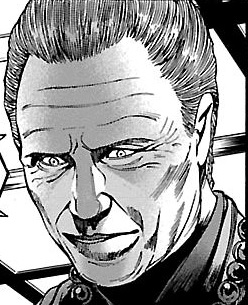 A blood sample was recovered from the victor and reapplied to strengthen the virus even further. This would then be administered to a new round of subjects and the process would continue over and over again. This technique was also inspired by previous Umbrella research undertaken on Sheena Island in the late 1990s to create the Hypnos gene. As well as humans, they used insects, reptiles and other mammals and soon the whole island became a testing ground. Eventually they created a very promising specimen that in later years Miller would perfect and later name ‘Schraube Damon’ following several years of modifications. It was programmed to attack targets with strong combat abilities and could be activated by an individual key word. It was also imprinted to not allow anyone to leave the island as an added security measure. Throughout their work, Miller was in awe of Alex Wesker and the two demonstrated their seniority by ensuring every work station inside the underground facility had a framed photograph of the two of them.

In 2006, Alex abandoned the project and made preparations to relocate to Sushestvovanie Island in order to escape Spencer. She left orders behind for the research team to be culled by applying the Kodoku principle to them all. Only the ultimate victor would gain her complete approval and be worthy of continuing the project in her stead. After she left, the researchers began to disappear one by one until only Miller remained and only he had access to the experimental virus. As the sole survivor, he had gained Alex’s complete trust and vowed to complete her work. But without Spencer’s resources and now forced to work on his own, Miller had to improvise in order to acquire fresh guinea pigs for his experiments. He began posing as a religious Shaman in order to gain control over the populace of the island, using voodoo and black magic practices to spread fear and bring the people under his sway. His manipulations enabled him to recruit followers and many villagers were brought down into the lab and injected with the virus before being made to fight to the death. After each round was completed he would extract the virus and run further tests to refine it. Through these experiments he developed many promising subjects, although periodically memories of their former lives would resurface and they would escape. To Miller’s regret, one such subject was a villager named Eliseo; the brother of islander Marilou Mabou. Eliseo, now named Subject 001193, had already been given the imprints and was regarded as a specimen with promising intellect and tenacity, but he managed to escape because on his own and without the assistance of his former colleagues, Miller could not fully control him.

As the years passed, Miller allowed the Kodoku Plan to continue, extending the battle ground to the whole island and whittling the remaining subjects down one by one. Occasionally the island would be breached by outsiders seeking to exploit his work but he took steps to deal with them all. Miller’s true identity was never revealed to the villagers and everyone knew him only as The Shaman. He claimed the abandoned ruins as his own shrine and employed local men to guard and protect it. People living on neighbouring Sanahoria Island referred to him as ‘the devil’ and stayed away from ever visiting Tortuga.

By 2014 the Kodoku Project was down to the final two B.O.W.s; the Schraube Damon – now outfitted with motorised propeller blades amongst other upgrades, and Subject 001193, the wandering Eliseo who had carved out a new existence keeping the island safe. When Idol Survival arrived to film on the island, Miller posed as The Shaman and officially welcomed them all by performing a ritual in Ague village, slitting the throats of pigs and bathing the villagers in its blood. He later caught TerraSave operative Inez Diaco and native islander Marilou Mabou inside the ruins where the Schraube Damon was being held. He had his men incarcerate them and he later tried to hack into Inez’ phone to find out who exactly she really worked for. He also knew Idol Survivor Producer Mike Seaman was a spy sent by Chinese conglomerate Shén-Ya Pharmaceuticals to steal his work. When he tried to re-start the Schraube Damon, Miller used the correct key word of ‘wife’ to activate it and watched with satisfaction as it decimated this outsider. Miller then retreated back to his hidden facility as the Idol Survival crew gradually became zombies and a full biohazard engulfed the island.

Miller eventually confronted the small band of survivors that breached his lab and explained all about his work on the Kodoku Project and how he earned Alex Wesker’s complete trust. With Wesker now dead he believed the curtain was ready to rise on his own era, but Miller’s aspirations were cut short when he was captured by Zǐlì; the second Shén-Ya spy. Zǐlì used Miller’s S-class clearance to get past the retinal scanner to enact the final phase of the Kodoku experiment. She then snapped his neck, killing him instantly.