Donna Beneviento was one of the so-called “4 Lords” that served under Miranda and an individual that upon administration of the Mold and and Cadou parasite demonstrated a high affinity to the infection thus retaining her humanity to an extent.

Beneviento was also a skilled doll-maker and ancestor of nobility linked to the area. The ancestral mansion was built on the outskirts of The Village close to a waterfall. Upon infection Beneviento’s split personality syndrome was amplified and she largely communicated through her doll called Angie. 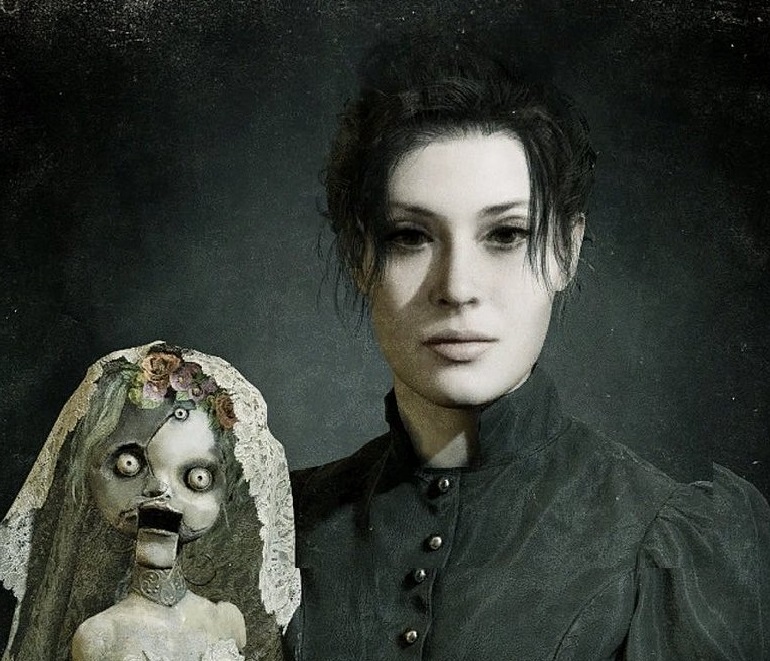 Beneviento was a very shy young girl and through tragedy was isolated to the mansion whilst taking solace in her dolls. Her particular favourite was a a doll called Angie that would later go onto activated through her own infection. Donna herself was the last of the Beneviento’s as Miranda had used the family as for experiments but these were not always successful. Bernardette Beneviento was killed by Miranda in the 1950s and a Claudia Beneviento likewise.

Donna was administered with the Cadou by Miranda early in her adulthood and unlike her family, she survived the initial administration and adapted to the Mold infection. Her brain affinity was judged to be high but Miranda was not particularly pleased with the results noting that her own mental health issues had before infection had been enhanced by the Cadou. Despite this, Beneviento was allowed onto Miranda’s council along with the other “4 Lords” of Karl Heisenberg, Alcina Dimitrescu and Salvadore Moreau.

Despite this Donna remained mute but was able to communicate through her favourite doll, Angie. It is unclear as to exactly how this worked, but it can assumed through experimentation, Beneviento was able to split the Cadou into smaller organisms which she retained control over with her mind. An additional ability Beneviento possessed was to cause hallucinations. This was only achieved through her connection to a particular local flower that grew close to the Beneviento graveyard and gardens. These flowers were also infected with the Mold and produced pollen that upon inhalation would cause the host to experience extremely vivid hallucinations personal to them. Beneviento was able to connect to the Mold that had been inhaled and directly control the hallucinations that person experienced.

On 9 February 2021, following the abduction of Rosemary Winters and the commencement of the ritual, Beneviento encountered Ethan Winters as he sought to recover his daughter through the ritual flasks. Eager to please Miranda, Beneviento lured Ethan to her mansion with hallucinations of his wife Mia after he inhaled the pollen of the flowers.

Entering the mansion, Beneviento toyed with Ethan making him complete tortuous doll related activities and recalling past conversations with his wife. She was even able to manifest Ethan’s  fears in a large monster-sized mutated human foetus that had been birthed by a doll version of Mia. Nightmare fuel.

Despite the odds, Ethan was able to navigate through the mansion and in doing so encountered Beneviento through her doll Angie. More details here.

Ultimately, Beneviento was defeated and her Rose flask was taken by Ethan.