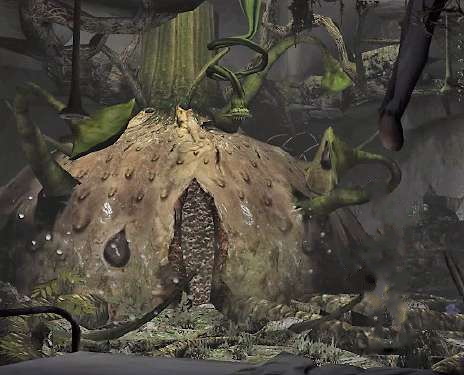 Dorothy Plant is the remnants of Dorothy Lester having been consumed by a t-Virus infected plant that had grown in the Abandoned Hospital in Raccoon Forest.  In his desperation, Dorothy’s husband, Al Lester began to treat the plant as his spouse, providing it with fresh meat he located within the forest. This included animals and even humans.

Over time, the Dorothy Plant began to grow and grow, gradually taking over the entire hospital with her vines. This placed enormous structural pressure on the building and soon stories began to emerge of hikers going missing in and around the hospital area only adding to the mystery of the locality.

In 1998 upon being explored by a few Raccoon City survivors, Dorothy Plant was destroyed when the group were able to take fire at the bulb of the creature. This level of firepower was too excessive for the plant and its final act was to spew out the human remains of Dorothy Lester.

With Dorothy Plant now destroyed, its grip on the hospital building waned and subsequently collapsed.