Doug Wright trained as a teacher before eventually becoming a university professor specialising in micro-biology. In the 1990s he relocated to Asia and had a relationship with Gracia Delenikas who later went on to manage Marhawa School. Although they later broke up and went their separate ways, they remained friends and years later he took up a position at Bennett University in Singapore, becoming a professor.

Doug had a profound interest in virology and was fascinated by the viruses created by Umbrella, despite the horrors they incurred. His knowledge on the Raccoon City incident was second to none and he wrote up a detailed dossier on the disaster. He was close to his nephew, Ricky Towaza, and became his legal guardian after Ricky’s parents died in 2002.

Sometime after the B.S.A.A. was restructured under the United Nations, Doug became an advisor to the Far East Branch due to his expertise with bio-technology. 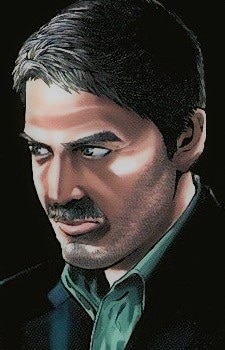 In 2009, he recommended Mera Biji undergo field training and watched her progress for two years as she developed a remarkable transformation from laboratory assistant to top Special Operations Agent. He also visited other branches and became acquainted with Chris Redfield. The two became friends and developed a mutual respect for each other. Chris had recently become Alpha Team Captain for the North American branch and spent a lot of time at headquarters encouraging the new recruits. He would often contact Doug for advice on such matters. Doug was also on hand when Chris’ team took care of an outbreak of t-Virus B.O.W.s in an American shopping mall and later invited Chris and Piers Nivans over to the B.S.A.A.’S Far East training centre to observe Merah Biji’s progress.

In 2012, Doug received a letter out of the blue from Gracia at Marhawa School asking for his assistance in a confidential manner. He booked some leave from Bennett University and took Ricky with him to the remote academy located in one of Asia’s most isolated forests. Several students in Marhawa School had become zombies and were chained up in the basement. Doug requested that Gracia bring in the B.S.A.A. immediately but she refused as she did not want the incidents made public. Doug and Ricky launched an investigation whilst being secretly watched from the shadows by Carla Radames who was conducting a C-Virus field test on behalf of Derek Simmons. Doug initially believed the t-Virus was the cause of the zombies, but came to question his assessment when Ricky was bitten on the neck and did not become infected. Over time, more strange incidents occurred and Doug planned to defy Gracia and bring in the B.S.A.A. himself but she sabotaged his vehicle to prevent him from leaving.

Eventually, Doug, Ricky and a security guard named Tahir Kapoor cornered a mysterious figure on the roof of the school they believed was responsible for all the attacks. However, this hooded figure revealed itself to be a prototype Lepotitsa B.O.W., a product of the C-Virus injected into a student named Nanan Yoshihara who was reborn from a chrysalid as a Complete Mutation Species. The creature attacked them and Doug saved Ricky’s life only to be penetrated through the chest by one of its tentacles. Doug was taken to the infirmary to recover but his injuries were very severe. As the outbreak continued to get out of control, the Lepotitsa eventually found him and used its gas to transform Doug into a zombie. He was later found by Chris Redfield and Ricky Towaza who put him out of his misery with a bullet to the head. He was later buried alongside Gracia in a cemetery and was still regularly visited by Ricky who thanked his uncle for always being there for him.