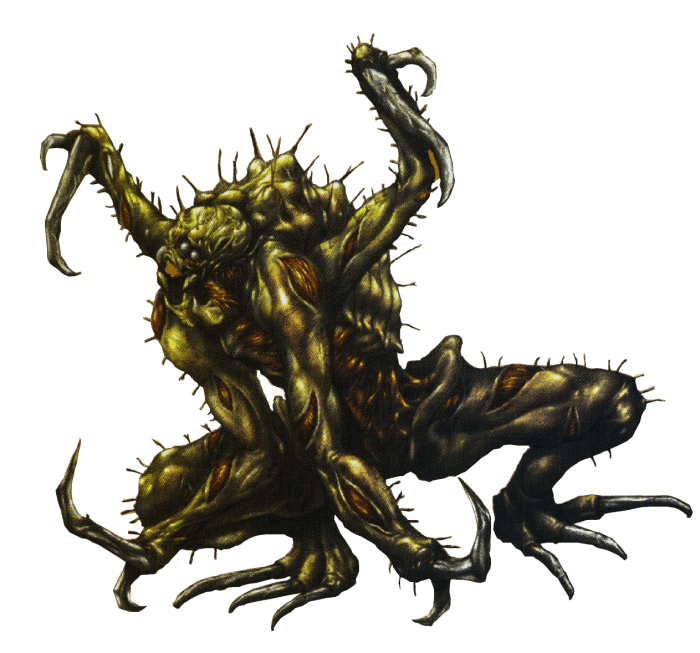 Nicknamed ‘DD’, the Drain Deimos was a small parasitic insect, possibly a flea that lived on the skin of infected animals and zombies, sucking and absorbing bodily fluids and nutrients, becoming infected by the t-Virus in the process. This caused rapid growth and mutation, repeating over and over through metamorphosis until it was over 100 times bigger than its original size, making the DD as big as an average-sized human. Its appearance was grotesque because of their extremely quick growth spurt, resulting in its exoskeleton not being fully formed and its inner organs and muscles appearing in odd and unnatural places. It crawled on walls and ceilings like a spider and when it captured a human, it pierced them through the cervical vertebra with its needle-like proboscis in its mouth, usually killing its prey instantly and allowing the Drain Deimos to absorb bone marrow and cerebrospinal fluid at its leisure.

This creature preferred dark and wet places like narrow alleyways and was asexual but could transform itself into a female when it obtained enough nutrients, allowing it to lay eggs and begin a cycle of self-reproduction. When mobile the DD moved with caution and were unlikely to attack unless provoked. When they homed in on a target, they attacked head-on with little regard for their own safety, using claws and fangs against their prey. Drain Deimos have also been witnessed rising on its hind legs and running like a biped.