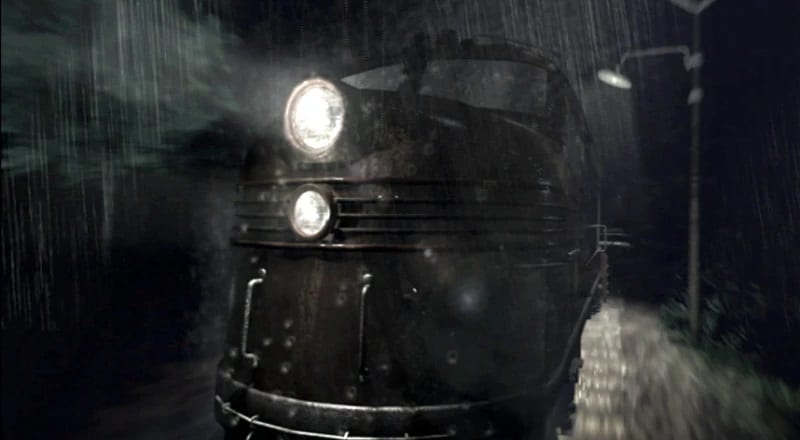 A luxury express train owned and operated by the Umbrella Corporation to ferry various employees in and out of Raccoon City to various facilities. The rail tracks were privately owned and built in the sixties to run throughout Raccoon Forest with one of the stops being the Management Training Facility. The interior of the train compartments were all lavishly furnished, based on the Orient Express and other fine locomotives of the age. It was constructed based off designs made by architect Vincent Gallo back in 1933.

The train itself was made up of five carriages with the first being the main engine block and driver’s compartment. A key card was needed to gain access to this area. The second carriage was split up into two sections with the first housing the Conductor’s Office and a small baggage compartment. The second section was split into two small bedrooms for long haul travel. Cars 2 and 3 were passenger cars with first class sleeping cabins on the upper floor next to the ‘Ecliptic Saloon’ bar area. A hook shot had been implemented for use when inspecting difficult to access car roofs or when connecting to special trains. The unit could carry no more than 80kg of weight so only one person could use it at any one time and it should be used only outside the small window by the first floor section door of the third carriage to gain roof access.

Carriage 4 was the dining car located near to the rear of the train. Once the dining car had closed for business, it was locked up and once vacated the automatic doors were switched off. The main power switch was located on the roof of the fifth car which was primarily used for luggage and storage of transported materials. Regular maintenance inspections took place when the train was garaged and inspectors were able to gain access by using the ladder located on the second floor of the dining car. The train was also installed with an emergency brake system and for security and safety reasons. This was activated in three steps: Firstly, the system would trigger once the controls in the driver’s compartment were locked out. Next a magnetic swipe card must be inserted into the device on the rear deck of the fifth car and this supplied power to both sets of controls. Finally a code was then entered into the rear deck control to release the lock. After this, the driver’s compartment code could be inputted. Upon completion of these three steps the manual brake would be available for use. The key card from the driver’s compartment was always kept in the conductor’s bag and the registration number for the train was 7268-563-M23.

The Ecliptic Express was destroyed on July 23rd 1998 following a biohazard outbreak. The train accelerated out of control and derailed inside the basement of the Management Training Facility.