Edward Ashford was a genius scholar and a respected member of the prestigious Ashford family. He was the heart and soul of Umbrella, with many leading scientists and researchers still looking up to him thirty years after his death. Whenever a major problem surfaced, it was not unusual for someone to say; ‘If only Lord Ashford were still alive…’

Edward was the son of Arthur Ashford, and because Arthur’s reign as family head was cut short due to having an older brother in Thomas, Edward became the fifth generation family head at quite an advanced age. His portrait in the palace on Rockfort Island depicts him as an elderly gentleman and scholar during his formative years as co-owner of Umbrella. He was blessed with extraordinary intelligence, boasting a high IQ and graduated university with a doctorate. 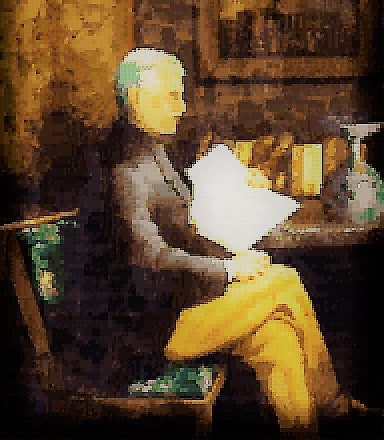 Whilst still at a young age he became an acquaintance of Oswell E. Spencer and the two became firm friends and respected colleagues. Whilst pursuing his own independent work as a scientist, Ashford often visited Spencer at his villa in mainland Europe where the two would talk long into the night about various ideas and ambitions. A family man, Edward doted on his own son Alexander and developed a fondness for the son of Spencer’s butler, a young boy named Patrick who was eager to learn his master’s craft. One night in the mid-1950s, Edward introduced Patrick to his first taste of brandy, a moment the young boy would savour throughout his life and document in his diary some 50 years later.

It was through Spencer that Ashford became acquainted with Dr. James Marcus and Edward accepted an invitation from the latter to work more closely with them both. After Spencer shared his theories regarding the ‘Stairway to the Sun’ from Henry Travis’s books, Edward hypothesised about an unknown virus existing somewhere within the natural world which could spur evolution upon an organism. This was the beginning of a quest to the discovery of the Progenitor Virus which they finally achieved as a group just a few years later in 1966. Edward, Marcus and Spencer led a research team deep into the bowels of the Kijujuan Mountains and discovered the lost Ndipaya city after three months of searching. There they uncovered the ancient sun garden and found the filo-virus infecting the Sonnentreppe flowers. This was a major breakthrough and samples were shipped back to the Europe where all three men began independent research into the virus.

It was Marcus who made the first breakthrough, sharing with Ashford one stormy night the results he achieved by filtering Progenitor through a repeat of the 1953 experiment performed by Stanley Miller, testing the Oparin-Haldane theory about the evolution of prebiotic chemicals and the origins of life on Earth. Ashford was astounded by what Marcus had achieved and together the two rushed to show Spencer. That infamous night in 1967 was the genesis for the birth of Umbrella Corporation. From that moment, the goal of Umbrella’s three founders was to achieve immortality through creating a neutered strain of the Progenitor Virus made more adaptable to modern humans. Throughout the course of human evolution, human adaptability had been lost completely and the virus was lethal to practically every modern day human. This was something they sought to rectify.

Edward worked hard with Spencer to create Umbrella, focusing all his time, effort and a large slice of his personal fortune into the endeavour. He was blessed with a consummate scientific mind, possessing none of the over-zealous ambitions for power and wealth his co-founders did. The most important thing to Ashford was family, and this trait was a big reason why the Ashford’s enjoyed a golden age under his leadership. Despite this, Ashford still possessed a mean streak. He actively took part in t-Virus research and was one of a select few aware of Spencer’s plans to murder George Trevor and did nothing to prevent this callous act. He also took design plans Trevor had made for Spencer and used them on the Ashford’s stately home in England. These plans were used again for the Antarctic base which resulted in the main hall replica. Over the years he developed a professional rivalry with Spencer but nothing on the scale of ferocity between Spencer and Marcus.

Following the formal creation of Umbrella in April 1968, Edward had Alexander assist him with a top-secret project involving Progenitor. This move was partly to groom Alexander for his succession. However, by now Edward was elderly and the strain proved too much for his ailing body. In a laboratory accident he contracted the Progenitor Virus and died almost instantly. There were rumours Spencer was behind the accident, but instead the blame was placed on Alexander and this marked the first step in the gradual decline of the Ashford family. Many believe that a curse was placed on the family bloodline ever since Edward co-founded Umbrella. This curse also affected Alexander, and his grandchildren Alfred and Alexia, eventually leading to the total extinction of the once proud Ashford family.

Following Edward’s death in July 1968, Spencer seized his shares in the company, and despite Alexander’s best efforts to restore his family’s honour, he was not blessed with the same talents his father had and was not seen as a threat by Spencer. Just before his death, Edward was informed by Alexander of his desire to re-animate their great ancestor, Veronica. Although he played no part in it, Edward had at least been aware of his son’s top-secret research project that become known as Code: Veronica.