Edward Dewey was a tall and imposing man and this intimidating presence did a good job of concealing the gentle giant that lay beneath. He was a well- respected member of S.T.A.R.S. Bravo Team and well thought of amongst his
colleagues. His role was as helicopter mechanic and flight navigator. Once the S.T.A.R.S. arrived on scene for their designated mission, Edward liked to trade the cockpit for a rifle and acted as a sniper to provide covering fire for
the others. His designated position on field assignments was Rear Security.

Edward had warm-hearted personality which led to the ‘gentle giant’ reference from his teammates. 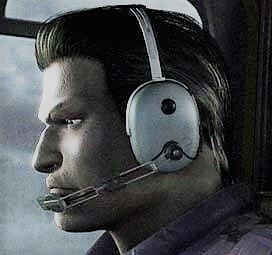 Strangely for a big man his hobby outside of work was dance. He was compassionate and approachable towards probationary officers and looked after the junior members of the team twice as much as anyone else did, though Richard Aiken also tutored the rookies. With the mansion incident being Rebecca Chambers’ first mission, he was secretly anxious for her.

On July 24th, 1998, Edward and the rest of S.T.A.R.S. Bravo Team began search and rescue operations for the missing hikers in Raccoon Forest. Although normally Dewey was the main helicopter pilot for Bravo Team, during the Raccoon Forest operations, he gave the controls to Kevin Dooley from the R.P.D. and assumed the position of co-pilot. After the helicopter crashed, he picked up his trusty rifle and investigated the forest. However, he was bitten by a zombie and pursued by a pack of Cerberus dogs. He ran and managed to evade the threat by diving through the window of the still stationary Ecliptic Express. But his wounds were extensive and despite the best efforts of Rebecca, he could only warn her about the lurking dangers outside before dying in her arms.