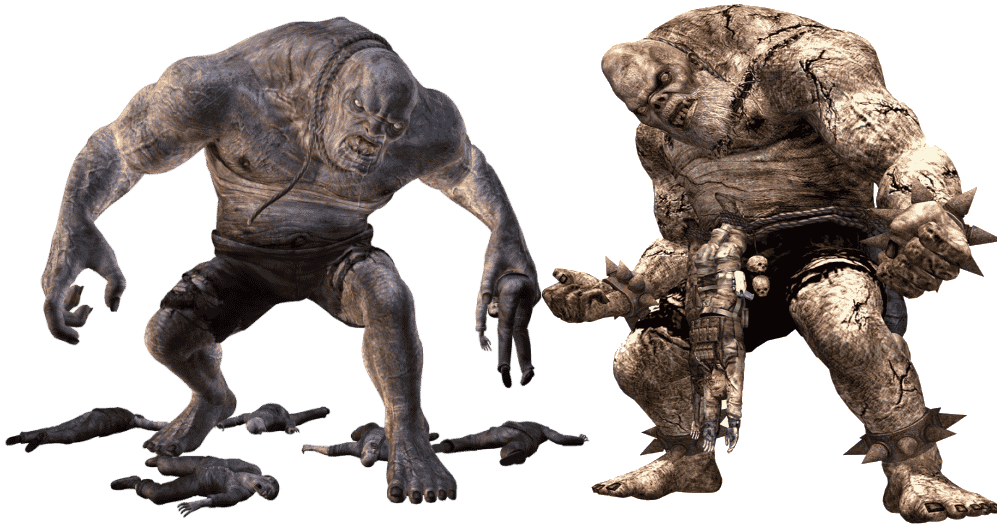 EL GIGANTE – The El Gigante was the result of the Los Illuminados attempting to create a human biological weapon using Las Plagas application experiments and genetic manipulation. As a result of these excessive modifications, the base human grew up to four times its original size (approximately 20-25ft) and became endowed with incredible strength, endurance and muscle mass. But these developments severely impaired its intelligence, and anyone that failed to keep their distance would often be killed in its blind rage. The Plaga infestation is centred on its back, particularly the cervical vertebrae around its neck. Its colossal strength enables the creature to lift huge boulders with ease and rip entire trees from the ground. Its increased muscle mass and thick skin also give it a significant resistance to gunfire, allowing it to consume abnormal amounts before any damage becomes visible.

When this threshold is reached, the pain sensors of the creature react and the individual parasite will sprout out through the skin, leaving the creature vulnerable to attack. The El Gigante was also excessively clumsy in nature and was easily distracted. One noticeable trait was that it drooled copiously. But despite the best efforts of the researchers to preserve intelligence, the creature remained feral in nature and was almost impossible to control. This led to only a handful of subjects being created and they had to be locked away. Several years later Tricell tried to improve upon the El Gigante creature with the development of the Ndesu, but only minor improvements were recorded. Its name in Spanish simply means ‘The Giant.’

NDESU – The Ndesu is an improved version of the El Gigante B.O.W. originally created by the Los Illuminados. Unlike its predecessor which was controlled via a single, enlarged Plaga, the Ndesu was implanted with five individual parasites to achieve maximum durability. This affords the creature superhuman strength allowing it to nonchantly pick up and fling incredibly heavy objects such as telephone poles and military vehicles. Because of improvements made to the base Las Plagas by Ricardo Irving and his research team, the Type 2 Plagas implanted into Ndesu were improved to the point where the host could faithfully carry out orders, and the control mechanism for the creature was vastly improved.

This alone was a massive success over the original El Gigante which was completely out of control and could only be contained in a secure environment. Originally human, Ndesu retained some aspects of its former personality and its key characteristic was its facial hair and beard. It had no pupils in its large, white eyes and it also wore a belt of skulls and hung a human corpse from its waist as a badge of honour. Only one Ndesu specimen was ever recorded and it was due to be sold to some undisclosed American buyers before it was destroyed by the B.S.A.A. in Kijuju. The name Ndesu derives from a huge creature
from Central African folklore, which is said to feed on humans.