Enrico was a seasoned veteran and Captain of S.T.A.R.S. Bravo Team. He was Wesker’s second in command for the unit overall and had more than enough experience to be the commander himself. It was only thanks to strong pushing from Umbrella that ensured the leadership remained solely with Wesker. Enrico’s abundant experience and popularity earned him deep trust from his colleagues and he performed many distinguished services unexpected of him.

He was recognised for his immense willpower and was mentally strong yet also had a gentle, non-threatening personality that made him easily approachable. He was well versed in all forms of weaponry and was proud of his superior survival skills. 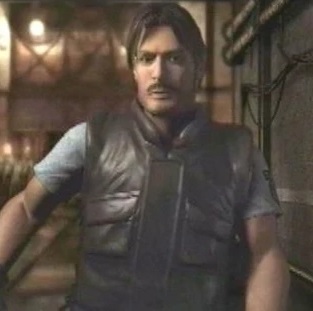 Outside of work, his hobby was golf. Despite his dedicated years of military and police service, Enrico felt somewhat insecure about leading the secondary S.T.A.R.S. team, always holding a secret fear that one day either Chris Redfield or Barry Burton would replace him as second in command. He was also concerned about the constant influx of new recruits and movement of personnel in the build-up to the mansion incident. But regardless, he never allowed these issues to affect his duty and he was always a confident leader in the field and always immensely proud to lead the unit whenever Wesker allowed
him to.

Once S.T.A.R.S. was officially assigned to the investigation into the brutal murders occurring in and around Raccoon Forest in July 1998, Wesker gave Enrico the go-ahead to lead Bravo Team in an aerial search of the region. However, unexpected engine trouble forced the team to make an emergency landing in the middle of the woods. After discovering a trashed MP truck and learning that fugitive former marine Billy Coen was on the loose, Enrico made the tactical decision of splitting the team up to track him down. During the ensuing storm, Enrico became separated from the rest of the team, yet was still in radio contact, checking in with Rebecca on several occasions throughout the night.

Alone in the forest and with no bearing, Enrico followed the train tracks and ended up at the vacant factory back at the city limits. There he discovered William Birkin’s underground laboratory and infiltrated it, although most areas were locked down at the time. It was here Enrico learned of Umbrella’s clandestine research and that the old mansion in the forest was actually a secret research facility. By sheer coincidence, he ran into Rebecca at the factory who had arrived looking for Billy Coen. But the revelations he’d uncovered about Umbrella made him to lose all interest in tracking down Coen and instead he instructed her to accompany him to the mansion, explaining that Richard, Forest and Kenneth were already ahead of him. But Rebecca insisted on tracking Billy down and perhaps against his better judgement, he allowed her to remain in the factory alone. Enrico continued by himself through an underground train tunnel that led direct to the Arklay Mansion. This was the same secret annex tunnel William Birkin had used to extract sensitive materials from the estate following the biohazard outbreak.

Enrico did eventually reach the mansion but never met up with the survivors of Bravo Team. Whilst searching, he discovered further evidence the S.T.A.R.S. had been set up and that a traitor was planted in the team. He was then attacked by an unknown B.O.W., most likely a Hunter or a Tick, and left injured and immobilised in the underground tunnels beneath the courtyard. Enrico remained alone in the dark for a number of hours and based on the information he’d acquired, he strongly suspected Chris Redfield was the S.T.A.R.S. traitor. He was eventually found by members of Alpha Team but was shot and killed by Wesker before he could reveal the full details of what he had uncovered.